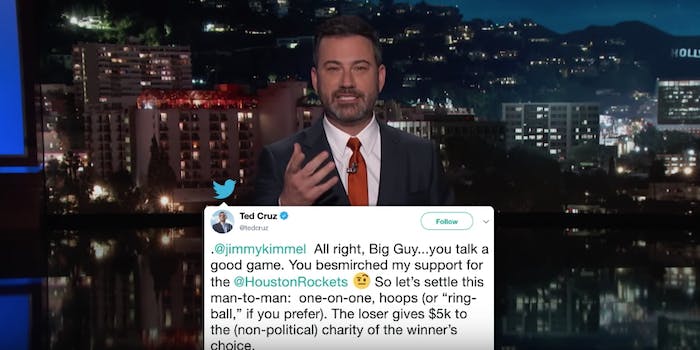 After roasting Sen. Ted Cruz (R-Texas) for looking “like a blobfish” at a recent Rockets playoff game, it looks like Jimmy Kimmel has a basketball beef on his hands.

In a segment Thursday night, the late-night host explained that his jokes had sparked a Twitter back-and-forth between himself and the Republican. Cruz, who has previously been quoted as referring to a hoop as a “basketball ring,” suggested the two face off in a one-on-one game, with the loser donating to the non-political charity of their choice. At first, Kimmel tried to up the ante, suggesting they play in tiny shorts or crop tops, but Cruz didn’t budge.

“As Borat demonstrated conclusively, NOBODY wants to see that,” the senator said on Twitter. “And ABC would probably be fined by the FCC! How ‘bout this: you dress yourself, I’ll do the same. Play to 10 (by ones), win by 2.”

The details still need to be hashed out, but now it seems Kimmel and Cruz will be facing off sometime soon.

“Maybe we should do this the Monday before the mid-terms,” Kimmel joked. “It’d be fun to watch him lose twice in one week.”