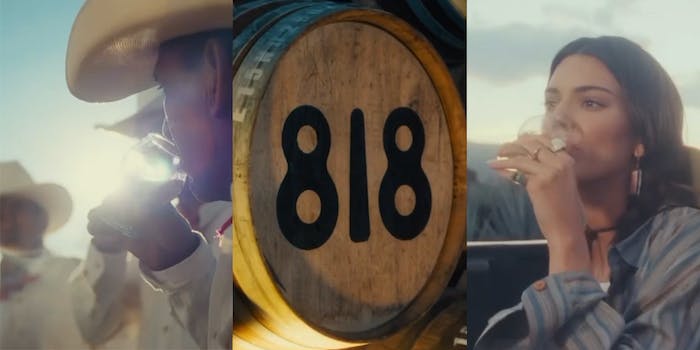 Kendall Jenner’s tequila brand 818 is under fire once again, accused of cultural appropriation in a new ad campaign. Now a rival brand is saying she ripped off their branding, bottled at the same distillery, and jacked up the price.

Posted on Instagram this week, the ads show Jenner at an agave farm in Jalisco, Mexico, posing in a rustic setting alongside Mexican farmers.

The new ad earned immediate backlash, with one viral Twitter thread accusing Jenner of appropriating Mexican culture and exploiting the tequila industry as an American outsider. Among other things, Jenner was criticized for posing on a dilapidated pickup truck (not exactly an authentic scenario for a super-rich reality TV star), and using a style of color filter that’s often used to exoticize Mexican settings in American movies.

The 818 tequila brand attracted criticism when it was first announced in February, inspiring concerns about Jenner potentially exploiting Mexican workers. Her initial launch video involved Jenner using the wrong Spanish terminology while describing her tequila brand and behaving in a way that suggests she just doesn’t know much about tequila. Now, she’s accused of ripping off the Austin, Texas tequila brand 512.

A recent post on the 512 Instagram account highlights the similarities between the two brands’ labels, pointing out that both tequilas are made at the same distillery in Mexico. “[818’s] batches are being distilled twice,” wrote 512 on Instagram. “Ours three times. Yet she is charging twice as much per bottle.” The implication is that Jenner attached her name to a subpar product and hiked up the price for personal gain, attempting to overshadow established brands with more expertise in the field.

The numbers don’t quite line up with that claim, however. Jenner’s blanco tequila was first teased to have a price point of about $60. But having gone on sale this month, it’s listed at retailers like Total Wine and More for $44.99. At the same vendor, 512’s blanco tequila sells for $26.99. Not quite double, but considerably pricier all the same.

This isn’t the first time Kendall Jenner has been accused of cultural appropriation. In fact, one could argue this it’s a key component of the Kardashian family brand. Judging by this new 818 ad campaign, Jenner hasn’t changed her strategy despite the backlash.