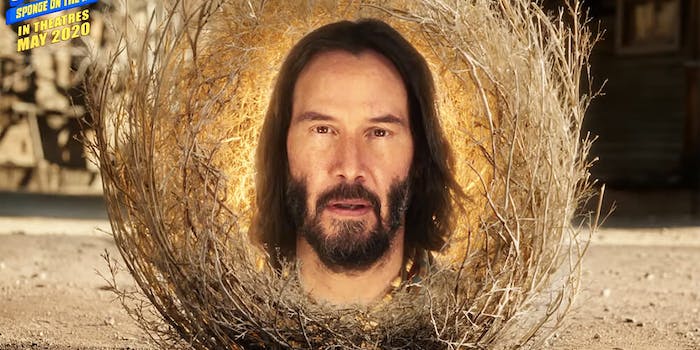 It's Keanu's year, we're all just living in it.

The trailer for The SpongeBob Movie: Sponge On The Run! dropped this week, the third feature film adaption of the long-running beloved animated Nickelodeon series. In this installment, SpongeBob Squarepants and Patrick are on the search for Gary, who has apparently been snailnapped! However, the fanfare over the trailer was quickly overshadowed by one cameo in particular—Keanu Reeves as a sage named Sage.

Because, as Keanu matter-of-factly explains in the trailer, “I’m made out of sage and I am a sage, so it works out pretty well.”

Between his other scene-stealing cameo in Always Be My Maybe, box office success of John Wick Chapter 3, the triumphant return of Bill and Ted, and even the happy reception to his public debut with girlfriend Alexandra Grant … If there were any doubt whatsoever that 2019 was the year of Keanu, this would have certainly tipped the scales.

So given the current obsession with all things Keanu, it should come as little surprise that it didn’t take long before the internet turned his brief SpongeBob movie trailer cameo into an entire-ass meme.

Some Twitter users mashed up Keanu’s various cinematic appearances throughout the year, from SpongeBob and his Toy Story 4 character Duke Caboom to his role in the Cyberpunk 2077 video game, and so on.

Keanu Reeves cinematic universe. All this shown in 2019 (some coming 2020). pic.twitter.com/PIt3j38NGt

Keanu Reeves has been the only consistently good thing about 2019 pic.twitter.com/iteEdm79Ec

What a year for Keanu pic.twitter.com/8JHHgqRjbS

Keanu Reeves has made in so much appearances lately that it’s crazy. pic.twitter.com/Qyz5z1llIG

One user perfectly encapsulated Keanu’s ongoing popularity with the following tweet. Yes, Reeves could star in just about any blockbuster project, yet he chooses to be a sage in SpongeBob.

keanu: fuck it, im a tumbleweed for spongebob pic.twitter.com/Cw9Pct0IQC

Because, as it turns out, Keanu actually apparently actually loves SpongeBob??

At any rate, over on Reddit, Sage Keanu naturally has since populated the r/Memes subreddit. Users took screengrabs of the SpongeBob trailer to make jokes about everything from video games causing violence to the proliferation of actually good childhood nostalgia that’s come out in the past week—such as the new trailers for the Sonic the Hedgehog and Scooby-Doo movies.

He is the messiah! from memes

Alright, maybe the movie isn’t so bad from memes

It really was from memes

And of course, Sage Keanu naturally drew comparisons to the creepy baby sun from Teletubbies.

I know this is a dead meme from memes

He has grown from memes

Thankfully, as far as we’re aware, there are no Teletubbies revivals currently in development. Sometimes dead is better.