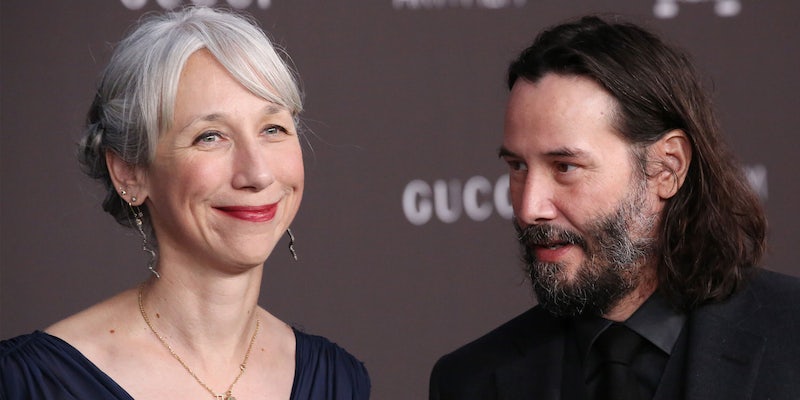 The actor, 55, made his relationship with Alexandra Grant, 46, public over the weekend.

So, of course, John Wick actor Keanu Reeves is trending on Twitter today because he’s decided to date a woman who is well within his age bracket. Over the weekend, 55-year-old Reeves made public his relationship with artist Alexandra Grant, who is 46. The two made their red carpet debut Saturday at the LACMA Art and Film Gala in Los Angeles.

Reeves and Grant had a business-partner-turned-romantic relationship that Grant described to Los Angeles Magazine in 2018: “We really like [a] ‘can-do’ [attitude]. Some people are kind of dreamers who have a lot of ideas but don’t like to get things done. I think we both like to have the idea and get it into the world.”

Most of the internet appears to be cheering the couple on.

“Keanu Reeves is in a happy relationship and we are going to celebrate that today everyone,” Twitter user @thetylerpointer wrote.

Of course Keanu Reeves and his girlfriend Alexandra Grant look like a dope cyberpunk couple. It just makes sense. pic.twitter.com/qq1uFwPOEl

Keanu Reeves’ happiness is the only thing everyone can agree upon

But some people couldn’t help but note the fact that Reeves is dating an age-appropriate woman—apparently something we don’t see too much of in Hollywood these days.

“People wondering why the commentary on Keanu Reeves’ gf is significant ignore the fact that we as a society have a very sick obsession with youth in women that teeters dangerously close to pedo territories. older men look at dating younger women as a sign of status, ownership,” wrote Twitter user @makirollOFC.

Keanu and his age-appropriate girlfriend look so cutely and refreshingly normalhttps://t.co/gL5dKnhpFc

Most people were sick of the commentary on the two’s ages.

Keanu Reeves has won an Olympic medal for dating someone “age appropriate” (9 years younger than him). Meanwhile the commentary about Alexandra Grant, his girlfriend, showcases how much America hates women, especially women over 40.

You can’t mock Leonardo DiCaprio for dating teenagers and also mock Keanu Reeves’ age appropriate partner for having aged in a way you find disgusting ie visibly at the same time G R O W U P !!!!!!!!! The misogyny was coming from inside the house!!

Another part of the reason news of the relationship is getting so much attention is because Reeves hasn’t had a girlfriend in decades after the tragic death of Jennifer Syme in 2001. Syme gave birth to their daughter, Ava Archer-Syme Reeves, in 1999 while eight months pregnant, but the infant was stillborn. Shortly after the tragedy, the couple broke up but remained close friends. Syme died in a car accident on April 2, 2001, and is buried next to her and Reeves’ daughter in a California cemetery.