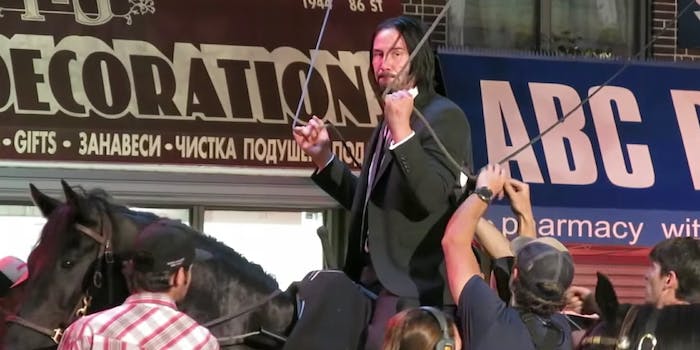 Talk about getting into character.

Keanu Reeves, actor and known meme lord, is riding again with a hilarious new image that the internet just can’t get enough of. He’s got a whole new vibe going on, too. Fierce. Dangerous.

Perhaps the word we’re looking for here is simply “badass.”

Some particularly impressive video and photos emerged showing off a supposed scene from his upcoming film John Wick 3: Parabellum last month. Everyone was thrilled to see Reeves getting his fair share of action-packed scenes—and doing his own stunts—in what will undoubtedly be the movie series’ most over-the-top entry yet. Just look at this.

The footage is fire, but one photo in particular stuck out to John Wick fans: Reeves riding a horse, looking totally majestic, arm outstretched with a gun to some poor sap’s head.

JOHN WICK 3 is going to be the greatest movie of all time based on this image alone. pic.twitter.com/NuSkyGxI11

And even though the guy’s wearing a helmet, we know what’s going to come next for him. Because no one messes with John Wick, and if they do, John Wick takes them out. Even while he’s riding a horse on a busy street alongside a motorcycle. That’s just what he does.

That’s what he does while on a horse. With a pistol. In the middle of the city.

The picture is making the rounds online, and people are really getting into Keanu “Murder Prince” Reeves’ horseback skills. Can you blame them? It’s such a sick shot. Really makes you wonder what’s going on in that scene.

Im watching John Wick 3 million times opening weekend if this makes it into the movie pic.twitter.com/s4sHxDR88b

Keanu even has perfect hair for riding a horse in the city while he shoots a motorcyclist in the head. #JohnWick3 pic.twitter.com/cjSX79tPnE

Keanu Reeves riding a horse while shooting a guy off a motorcylce… what more can you ask for, im sold

Turns out John Wick 3 is the episode of My Little Pony: Friendship is Magic that I always wanted. pic.twitter.com/RYMhkb1PTl

Judging from this photo and the footage above alone, we can safely say that John Wick 3: Parabellum is going to be absolutely ridiculous.

The film lands in theaters on May 19, 2019. Post-movie, who knows what kind of memes Keanu will inspire?