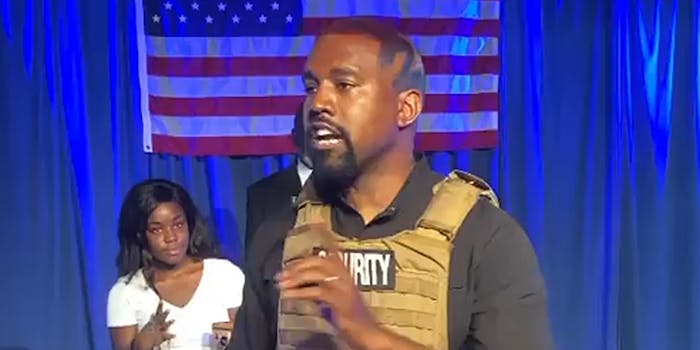 Fans are worried about his mental health.

West began by sharing screenshots of his Google search results for Berry and Lawrence without context. Shortly after that, he seemingly took a shot at Jenner, tweeting, “Kriss [sic] don’t play with me you and that calmye are not allowed around me children. Y’all tried to lock me up.”

West repeatedly alleged that Jenner and Kardashian West tried to “lock him up” and said Jordan Peele’s 2017 social thriller Get Out was about him.

“Kim was trying to fly to Wyoming with a doctor to lock me up like on the movie Get Out because I cried about saving my daughters life yesterday,” West tweeted, apparently referencing his Sunday night presidential campaign rally in South Carolina, during which he asserted that Harriet Tubman never freed slaves and sobbed while claiming he and Kardashian West considered having an abortion.

Near the end of his tweetstorm, West claimed he was at his ranch in Jackson Hole, Wyoming and goaded Jenner and Kardashian West to “come and get” him. He later tweeted, “Kriss and Kim call me now,” and shared a screenshot of an apparent text to Jenner asking if she was ready to talk.

West has since deleted most of his tweets from last night and returned to promoting his forthcoming album Donda, which he says is coming out Friday.

In the wake of his tweetstorm, West shot to the top of Twitter’s top U.S. trends for several hours. #PrayForYe also trended as Twitter users raised concerns about the rapper’s mental health.

“Don’t let Kanye become another Etika situation,” @6milliWaystoRap tweeted. “Don’t laugh, don’t insult him. He needs genuine support in the ways that’ll help him with what he needs, not what he wants. If something bad happens to Kanye it’s on us.”

West has been vocal about his bipolar disorder in recent years, and in November 2016 he was hospitalized for exhaustion after canceling several dates of his Saint Pablo Tour. TMZ reported that a dispatcher called it a “psychiatric emergency.”

“It’s hard to watch our idols go through shit like this,” the @DebatingHipHop_ fan account wrote. “Pray Kanye sorts everything out and gets help.”

Others, of course, pounced on the opportunity to crack jokes or share memes at West’s expense.

Many Twitter users condemned fans who used West’s latest outburst as a chance to make memes or jokes about mental health—especially if they perceived those fans to otherwise act performatively woke on Twitter.

“People pretend to care about mental health and then sit on twitter mocking Kanye west all day, he is clearly mentally ill and needs the help from loved ones and professionals,” @iNabber69 tweeted. “Watch Twitter pretend to care about Kanye the day he ever leaves us, this app is just 100% fake bullshit.”

Pop star Halsey—who has been vocal about her own struggles with bipolar disorder—weighed in on West’s outburst in a series of tweets Monday night.

“No jokes right now,” she wrote. “I have dedicated my career to offering education and insight about bipolar disorder and I’m so disturbed by what I’m seeing. Personal opinions about someone aside, a manic episode isn’t a joke. If you can’t offer understanding or sympathy, offer your silence.”

“If you wanna think someone is an asshole, go ahead,” Halsey continued. “Lots of people with mental illnesses are great. Lots of them are assholes. Because they are people. With nuanced personalities. But making jokes specifically targeted towards bipolar hurts more than the 1 person ur angry with.”