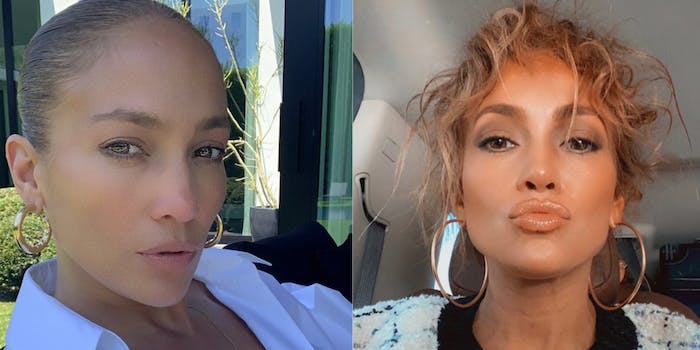 Even YouTuber Jackie Aina is being accused of cyberbullying after mocking the photo of J-Lo.

A photo featuring Jennifer Lopez’s “baby hairs” is being ruthlessly mocked online. Even YouTuber Jackie Aina is being accused of “cyberbullying” the star after weighing in on the controversy.

On July 16, Lopez posted a new photo of herself sporting slicked-down baby hairs and a space buns hairstyle with the caption, “Baby hairs and moñitos.” (Moñitos is translated to “small hair buns.”)

After posting the photo, Lopez caught serious backlash from people claiming that she actually doesn’t have baby hairs due to how long hers seem to be.

“Y’all know we don’t just do baby hair for [aesthetic] purposes and fun, right?” one user on Twitter wrote. “Its for hair too short to be properly slick back back into a style so instead of just leaving them there we do them to try to spruce them up. Cause this looks dumb. Put those bangs in those buns sis.”

Others cracked jokes about how her baby hairs have grown up and are off to college or the retirement home.

“How your baby hairs got a mortgage,” one user questioned, with another saying, “chile those ‘baby hairs’ working an office job and picking their three kids up from school.”

In the flood of critical comments Jenny from the Block received, Aina joined in on the pile-up. Aina posted a video of Janet Jackson saying “Oh my god, I’m so embarrassed”  in response to Lopez’s photo.

Aina then quote-tweeted Lopez’s tweet with a Photoshopped version of the image. It featured curtains covering the controversial baby hairs, amassing over 97,000 likes and 16,000 retweets.

Many of Lopez’s fans defended the singer by accusing Aina of “cyberbullying” Lopez. “What Jackie did with that JLo picture is bullying. So I honestly don’t understand why there are people laughing in the replies,” one user tweeted.