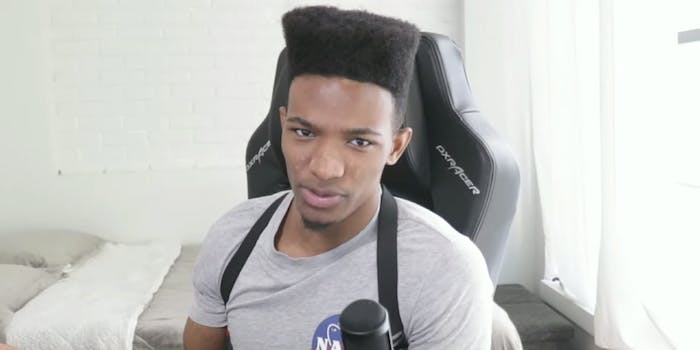 Update 11:55am CT, June 25: The New York Police Department confirmed Tuesday morning that Etika has been found dead. He was 29.

We regret to inform that Desmond Amofah aka Etika has been found deceased. https://t.co/sedwZZxglw

On Monday evening, police officers pulled an unresponsive man from the East River in New York City. The man was pronounced dead shortly thereafter. Since Wednesday, YouTuber Etika— real name Daniel Desmond Amofah— has been missing after creating a YouTube video where he apologized for his actions and the controversy they created. Following a suicide scare two months ago, Etika was criticized for tweeting anti-Semitic, homophobic sentiments that seemed almost schizophrenic in nature.

“I’m sorry for leaving such a stained legacy,” said Etika in the video. “I don’t know what awaits me on the other side, but I’m ready to face it. As far as we know, there is no life after death.” The video was filmed during the daytime but was scheduled to go up Thursday at midnight.

Etika has been missing since then and a police investigation has been ongoing.

On Wednesday, Etika’s belongings were found near the Manhattan Bridge. While canvassing the bridge on the same night Etika went missing, the police found the following: Etika’s wallet, New York driver’s license, other cards, cellphone, and a Nintendo Switch. Police also found what they presume to be his laptop bag, which contained a pair of boxers, a shirt, shorts, and headphones.

Now, BNO News is reporting that the body found in the East River was only about half a mile from where Etika’s belongings were found. BNO News also said that police declined at the time to say whether Monday’s discovery is related to the search for Etika.

“The medical examiner will confirm identification,” a police spokesperson said on late Monday night. “Identification of the deceased is pending proper family notification.”

Some are prematurely speculating that the body recovered in fact isn’t Etika by incorrectly citing a news article from Brooklyn News. An examination of the article’s date shows that it details events that took place in 2014.

Seeing a bunch of people on social media sharing a story from Brooklyn News 12 saying the body found is not Etika, but that story is from 2014 pic.twitter.com/4OWcqEbQzx

It is unclear whether this development is directly related to the ongoing search for Etika as a missing person.