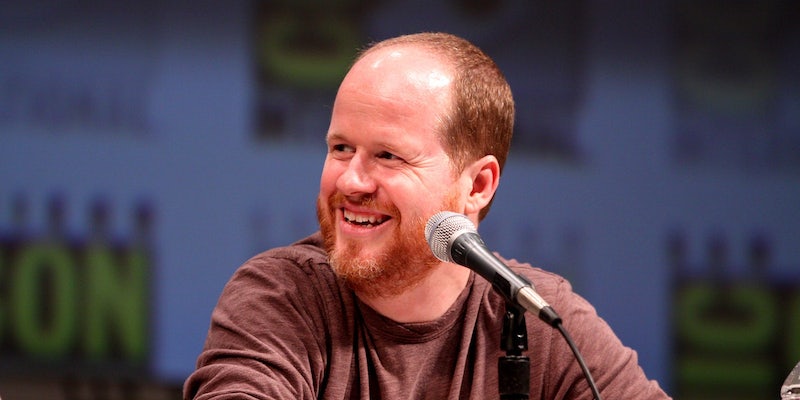 Joss Whedon isn't backing down from his obsession with traumatized waifs.

The Nevers is Whedon’s first original TV project since Dollhouse in 2009, and it’s packed with familiar ideas from his filmography. Set in Victorian London, it’s an urban fantasy drama about a group of superpowered women called the Touched. Lead actress Laura Donnelly (Outlander) was cast back in April, playing the “reckless, emotionally damaged” heroine Amalia True, and now we have a longer cast list including Nick Frost (Shaun of the Dead) and Dollhouse actress Olivia Williams. Longtime fans will certainly recognize some elements of HBO’s character descriptions, especially if you pay attention to Whedon’s controversial treatment of women.

Whedon is one of the most successful writer/directors in Hollywood, inspiring a generation of feminist pop culture fans and critics. But over the past few years, those fans have grown more critical of Whedon’s own work—especially following allegations of emotional abuse from his ex-wife, and alleged affairs with young female employees. Despite the legacy of Buffy and Firefly, there’s a growing awareness of recurring sexist themes in his shows and movies, particularly his obsession with beautiful, traumatized young women. The leak of his unproduced Wonder Woman screenplay was an eye-opening moment in 2017, revealing a demeaning and sexualized take on the character, and focusing repeatedly on her feet—a common theme for Whedon.

It’s too early to make a real judgment of The Nevers, but the cast list already feels like a study in Whedon’s recurring issues with race and gender. One glaring example is Maladie, played by Amy Manson. Her description reads like a parody of Whedonesque cliches:

“Committed by her husband (and genuinely unstable), she’s been warped by a power she can’t understand, and tortured by doctors intent on finding its source. She now lives underground, runs a gang and is on an infamous murder spree. She affects a theatrical parody of a bedlam waif, but mad as she is, she’s a woman with a purpose.”

Maladie (whose name means “disease” in French) draws immediate comparisons to Drusilla in Buffy and River Tam in Firefly —waifish young brunettes whose quirkily-portrayed mental health problems emerged from abuse at the hands of powerful men. You could also add Fred from Angel and Echo from Dollhouse to this list, along with Whedon’s versions of Scarlet Witch and Black Widow – who he introduced in The Avengers tied up and kicking her shoes off for a fight scene, followed by a wildly sexist infertility subplot in the sequel. All too often, Whedon’s female empowerment narratives are rooted in origin stories where young, vulnerable white women are tortured and controlled. Meanwhile, the more resilient and “powerful” women are paired up with (or suffer unwanted attention from) nerdy men who arguably serve as Whedon’s stand-in: Xander in Buffy, Topher Brink in Dollhouse, and the trio of geeky villains in Buffy season 6.

Currently standing at 12 main characters, The Nevers cast also includes the stern matriarch of the Touched women (Dollhouse’s Olivia Williams), her nerdy brother (who mistrusts the Touched, but still has a crush on one of them), and a morally ambiguous pansexual blackmailer. The one Black woman in the predominantly white cast is described as a “rough” criminal who looks out for herself.

Judging by the response to this casting news on social media, Joss Whedon now has a lot in common with J.K. Rowling. Both are tremendously successful creators who left a lasting mark on pop culture, but in 2019, their new projects earn more groans than celebration from longtime fans. And as more people acknowledge problems like Firefly’s erasure of Asian characters, the issue of representation is a particular sticking point. These days, Whedon’s passion for traumatized, ass-kicking waifs feels more like a fetish than feminism, with fans cracking jokes about how long it will take before one of his Victorian heroines goes barefoot onscreen. If you were hoping that Whedon had listened to the feminist criticism of his work, these character descriptions strongly suggest he did not.