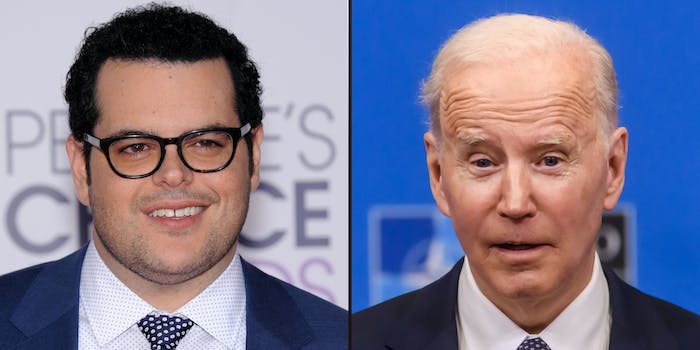 ‘A Democrat has been president for 3 of the last 4 terms’: Josh Gad says ‘register to vote’ amid Roe v. Wade leak

The world is still reeling after a draft of the Supreme Court’s ruling that would overturn Roe v. Wade was leaked to Politico Monday night, which the Supreme Court confirmed was authentic. Amid calls to donate to local abortion funds, calls for Congress to codify Roe v. Wade and expand the Supreme Court, protests at the Supreme Court, outrage about the unnecessary cruelties pregnant people will now face in a post-Roe world, and the slippery slope that will lead to the erosion of other rights… another call to arms has been met with immediate backlash.

You can almost understand the logic behind the calls that everyone from celebrities and activists to politicians and President Joe Biden are making: To protect the right to an abortion, vote—and specifically vote for Democrats. For example, Josh Gad is among those calling for people to register to vote in order to have Democrats in place to protect reproductive rights.

Yet Gad’s tweet was immediately met with comments pointing out the futility of telling someone to just vote.

Gad was far from the only person to tell people to vote (the activist Erin Brockovich did so as well with a “tough love” message). But Gad’s tweet, in particular, struck a nerve for its vagueness, its lack of immediate tangible action, for being a prime example of resist-era inaction that people can do without a second thought, you name it.

What is also left unmentioned is extreme gerrymandering in many states and the laws that make it much harder for people to qualify to vote.

And when Biden released his statement, people not only kept resurfacing his promise to codify Roe v. Wade in 2019 amid his presidential campaign, they pointed out that they did vote for a Democrat: him.

The problem with people being told to vote for Democrats who will protect their rights to an abortion is that, for millions of Americans about to lose freedoms that have been in place for nearly 50 years, that message is futile. A Democrat is in the White House. Democrats have control of the House and the Senate. The House already voted to codify Roe v. Wade, but the resolution is unlikely to pass the Senate; it doesn’t have the votes to pass on its own and Democrats don’t have enough votes to kill the filibuster. And several top Democrats (including Nancy Pelosi) are actively campaigning for an anti-choice Democratic incumbent who’s facing a runoff congressional primary in Texas against a much more progressive opponent.

Many of those people voted for Democrats, and they’re about to lose their right to have an abortion anyway.