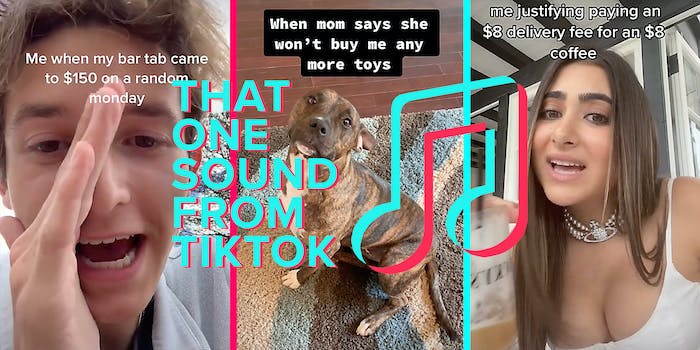 What purchase are you justifying this week?

This week, we explore the rare viral TikTok sound from a politician. One that’s been around for less than a month but already found its niche: Justifying our ridiculous pandemic purchases.

The sound going around TikTok is from President Joe Biden, and it starts with a whisper: “Guess what? It grows the economy. Benefits everybody. Hurts nobody.”

The meme account betches posted the audio over the weekend, with the caption “When I order in breakfast, lunch, and dinner.” It’s since been used in more than 6,500 TikToks to convey our current material impulses, whether it’s an entire Garfield-themed spice jar set, or Warheads using the sound to get people to buy a box of candy.

A lot of the TikToks have to do with the way we pay for things now. “When me and my friends Venmo the same $20 to each other back and forth for food,” says chrisfinnn.

The soundbite is from early May, when President Biden was pushing his infrastructure plan. During a press conference at the White House on May 5, he discussed his separate American Rescue Plan, which would include tax hikes for the super rich. Just before the viral sound he says: “What’s going to grow America more? What’s going to help you and your security more? The super wealthy having to pay 3.9 percent less tax or have an entire generation of Americans having associate degrees?”

The sound is going viral as fast food and nursing home workers make plans to strike and “We are closed” trends on Twitter, signaling just how fed up underpaid employees are after a year that put them at risk. A tone-deaf tweet from Boston Globe Ideas earlier this week suggested that working from home is “too convenient” and that remote employees need to get back to time-sucking commutes, an idea that was quickly ratioed.

While the sound is being used to spoof what we often needlessly consume, other TikTokers used it to address pay disparities in their own line of work.

Joe Biden isn’t the only politician who became a TikTok sound recently: Vice President Kamala Harris did right after the election, and audio of Donald Trump reacting to Ruth Bader Ginsburg‘s death has been used to convey the fluidity of work and time off during the pandemic.