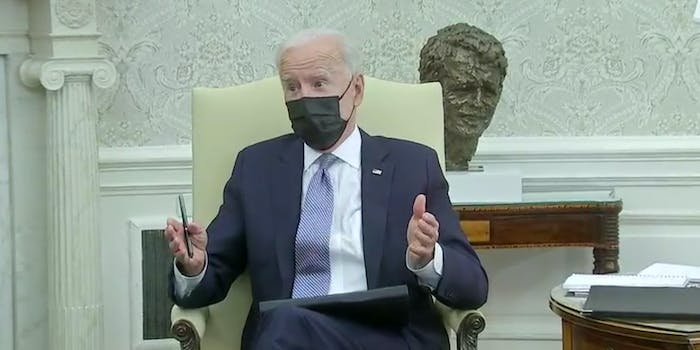 The president has been aggressively pushing broadband as part of his sweeping infrastructure proposal.

President Joe Biden continued to push the notion that connecting Americans to broadband internet should be classified as infrastructure ahead of a meeting with members of Congress to negotiate the administration’s recent infrastructure and jobs plan.

In a fact sheet for the plan, the White House described broadband as “the new electricity,” further cementing Biden’s belief that access to the internet should be included in any plan that aims to strengthen the country’s infrastructure.

Last week, the president continued to advocate for the inclusion by tweeting: “Broadband is infrastructure.”

The country’s vast digital divide, or the gap between Americans who have access to affordable high speed broadband and those who don’t, has been highlighted by the coronavirus pandemic.

In remarks on Monday ahead of a meeting with members of Congress about his massive infrastructure plan, Biden once again made a broadband push.

“I’m prepared to negotiate as to the extent of my infrastructure project as well as how we pay for it in a serious conversation about to do that,” Biden said. “I think everyone acknowledges that we need a significant increase in infrastructure, and it’s going to get down to what we call infrastructure.”

“Some people don’t think—I’m not suggesting anyone here has that view—but there a lot of folks saying the fact that we have millions of people not able to drink because it’s coming through lead pipes, I think that’s infrastructure. I think broadband is infrastructure. It’s not just roads, highways, bridges, etc.”

The plan has faced some pushback, specifically from lobby groups representing the cable industry and internet providers.

Powell also dismissed Biden’s proposal’s focus on supporting local-owned municipal broadband, saying that it suggested that “the government is better suited than private-sector technologists to build and operate the internet.”