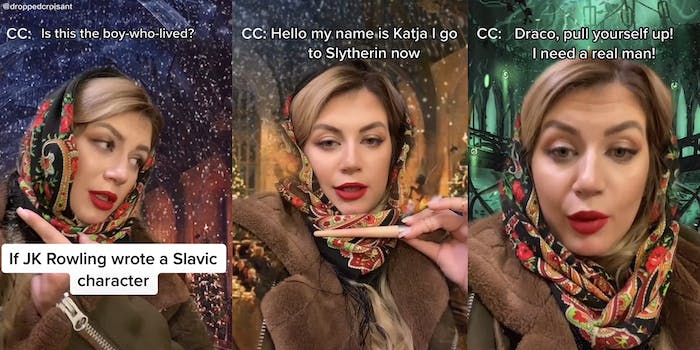 'If J.K. Rowling made an X character' is a new meme format.

J.K. Rowling’s transphobic comments apparently haven’t led to her cancellation, but they have vexed the Harry Potter fandom, which has had to find ways to continue enjoying characters they love while separating themselves from the creator.

On TikTok, Harry Potter fans are “reality shifting” in an attempt to experience Hogwarts. So it’s no surprise fans are also rewriting characters to assert ownership, and create representation lacking in Rowling’s books. One recent trend frames the casting of characters in a hypothetical. “If J.K. Rowling made a Latino character,” goes one viral TikTok, which imagines Rowling’s writing of the character as racist caricature.

Other fans presented a Harry Potter universe where bisexuals exist. Or a person with autism. Or a non-binary character. Or a Slavic character.

Some of these characters are aspirational, some are critiques of how certain characters are—or would be—written by Rowling. She previously faced backlash for how she portrays Asian characters, and for trying to retroactively make her characters more diverse, and for her Eurocentric views on wizarding.

At least one Harry Potter character is providing comfort in this difficult time: Draco Malfoy has experienced his own rewriting on TikTok (or DracoTok) and Tom Felton is (tentatively) getting in on the action.