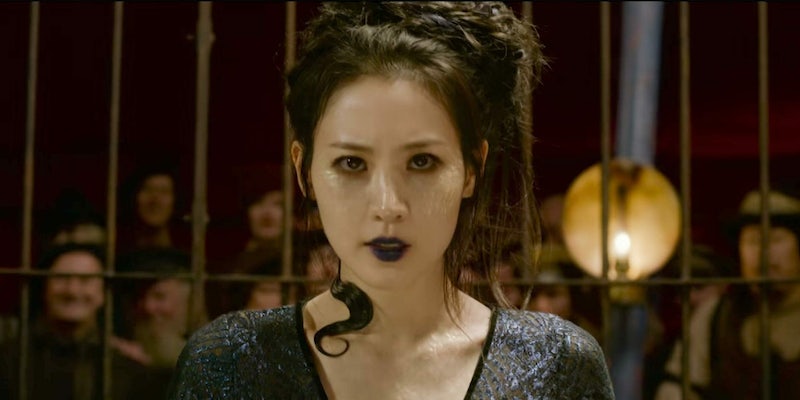 At this point, J.K. Rowling’s post-series Harry Potter revelations have become a running joke. As she reveals more and more details that didn’t appear in the books, her choices have begun to feel like the proverbial dog returning to its vomit. The latest addition enters the realm of self-parody: Apparently Voldemort’s pet snake Nagini was an Asian woman all along.

If you’re the kind of person who got invested in the political subtext of Harry Potter, you probably grew up recognizing its flaws. Among the first generation of Potter fans, Rowling’s vision is generally seen as a well-conceived allegory with one obvious problem: a lack of diversity in the main cast. This created high expectations for the Fantastic Beasts movies to be more inclusive, but they didn’t get off to a great start—and they were hindered by Rowling’s convoluted take on American history. The first film’s cast was as lily-white as the original Potter movies, and while the sequel introduces two women of color, one of them is already being criticized for having racist overtones. Because really, a murderous snake? Come on.

We all remember Nagini from the books: a massive, deadly snake who answers only to Voldemort’s commands. She appears several times throughout the series, eventually killed by Neville Longbottom during the Battle of Hogwarts.

Rowling tweeted that she planned Nagini’s human backstory from the start, but Fantastic Beasts: The Crimes of Grindelwald is the first we’ve heard of it. No one could have predicted that Nagini would return in the form of South Korean actress Claudia Kim.

In the 1920s American setting of Fantastic Beasts, Nagini is a human circus performer. Her trick involves transforming into a snake, but she isn’t an animagus like Sirius Black. She’s a maledictus—a person who is cursed to turn into an animal, eventually losing their human form altogether. According to Rowling, this curse is passed down from mother to daughter, and only happens to women.

They're different conditions. Maledictuses are always women, whereas werewolves can be either sex. The Maledictus carries a blood curse from birth, which is passed down from mother to daughter. https://t.co/wYfvPeQFRW

Claudia Kim told Entertainment Weekly, “You’ve only seen [Nagini] as a Horcrux. In this, she’s a wonderful and vulnerable woman who wants to live. She wants to stay a human being and I think that’s a wonderful contrast to the character.” Aware that one day she’ll transform permanently, she knows “the clock is ticking” on her humanity.

So to recap, Nagini is the first Asian character with a central role in the franchise. (Previous installments included characters like Cho Chang and the Patil twins, but they were tertiary roles at best.) She’s introduced as a circus freak with a monstrous curse, and she’s destined to become a fascist supervillain’s pet. You can see why people would take issue with this, and numerous fans are already drawing comparisons with the “Dragon Lady” stereotype, an old trope that characterizes Asian women as mysterious or dangerous femme fatales. (In this case, the fact that Nagini’s a magical reptile doesn’t help matters.)

The racist undertones of Nagini’s role in Fantastic Beasts

Curses and transformations are recurring themes in Harry Potter, so you could argue that Nagini’s role is perfectly typical. But consider, for a moment, the white leads of Fantastic Beasts. Newt Scamander is a likable nerd, Jacob Kowalski is a harmless buffoon, and the Goldstein sisters are brave and charming. The only other character with horror and monstrousness baked into their role is Credence Barebone, a man whose childhood abuse gave him a terrifying, unwanted power. He and Nagini will be friends in the upcoming movie, and their outcast status makes them potential targets for recruitment by Grindelwald.

Meanwhile, Nagini’s entire role revolves around her inhumanity: first being gawked at in a circus and eventually transforming into Voldemort’s pet/weapon. There’s nothing intrinsically wrong with writing characters of color as villains or victims, but if that’s all they are, you have a problem. And so far, the basic premise of Nagini’s role is dubious at best. While the white characters come from a neutral starting point, Nagini is already bogged down in racist subtext, beginning with her introduction in the trailer: a mysterious woman performing in a cage.

This isn’t the first time Rowling faced criticism for her portrayal of Asian characters. In 2013, poet Rachel Rostad went viral with a video accusing Harry Potter of fetishizing Asian women, referencing a long-running debate about whether Cho Chang is a plausible Chinese name. (Some fans argue that it reads more like a pair of Korean surnames.) Rowling earned similar criticisms for Harry Potter and the Cursed Child, which included a British-Indian character called Panju—again, not a plausible name. With Nagini, we have a character with a Sanskrit name being played by a Korean actress.

Someone tell me why Nagini was chosen to be a cursed Korean woman when Nagini sounds like Naagin, the snake people from Indian mythology, and why nobody thought to consider the Indian War for Independence taking place at that time, where I can see curses flying and going wrong.

In short, Rowling has a history of sidelining and half-assing her portrayal of Asian people, suggesting far less research than the names and backgrounds of white characters.

In the Harry Potter books, Wizarding politics were firmly based on the British class system. The setting felt authentic, depicting a conservative society falling foul of bigotry and authoritarian leadership. It’s an effective and thoughtful allegory, so it was disappointing to see Rowling display such an ignorant attitude to American politics leading into Fantastic Beasts. In a series of official canon posts called A History of Magic in North America, Rowling introduced an insurmountable conundrum as part of the backstory for Fantastic Beasts:

The setting was incoherent from the start. Rowling’s History of Magic posts provoked backlash for appropriating and misinterpreting Native American mythology and failing to understand basic elements of American history. She positions the Salem witch trials (a relatively minor incident) as a world-shaking event that led American wizards to be terrified of muggles when their British counterparts shrugged off their equivalent witch-burnings. Then the MACUSA (Magical Congress of the United States of America) was formed in 1693, before the USA was actually a thing. There’s no mention of how magical people behaved during the Civil War, or how they responded to slavery.

For instance, what happened to magical children born to enslaved parents? Were they allowed to use magic to rescue their no-maj friends and relatives? And if not, how the hell were they meant to integrate into magical society without resenting their white peers? How did the MACUSA retain such a tight leash on secrecy when America received a constant influx of immigrants from other magical cultures?

There’s no believable way for Wizarding America to avoid the reality of muggle racism and culture. Yet the first Fantastic Beasts movie gives us a typically thoughtless Hollywood set-up for the main cast: the protagonists are all white, while background characters are more diverse, implying an inclusive environment. We’re expected to believe that Wizarding America is comparatively racism-free while also being riddled with anti-muggle paranoia—in a story with all-white protagonists. Rowling tried to shift focus from real-world racism onto a wizard/no-maj conflict, but the entire setting, from Ilvermorny school to the film’s casting choices, suggests a culture dominated by European settlers. There’s no consideration for how Black and Native American muggle-born kids would experience this world. Like I said: It’s totally incoherent.

With this dubious background, it’s hard to feel optimistic about Nagini’s role. Rowling has an excellent instinct for British class politics and European mythology, but so far, she has a poor track record when writing characters of color.