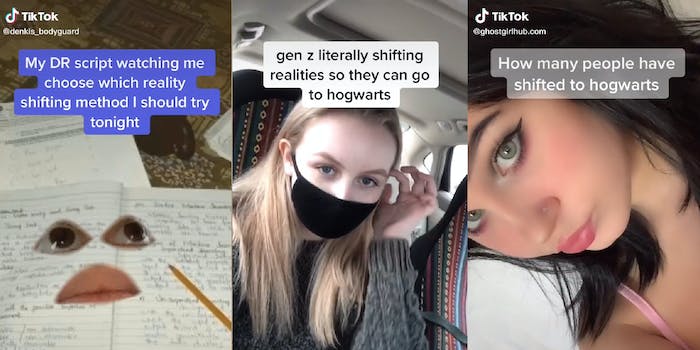 Draco Malfoy is seeing a lot of action on TikTok.

Many of us would like to be in a different reality right now, but TikTok is taking matters into its own hands.

“Shifting” or “reality shifting” has become a popular trend on TikTok. The reality shifting hashtag has more than 55 million views, and it is full of firsthand accounts of alleged trips into different realities, as well as tips for a successful shift.

If you scroll the tag, you’ll realize the community is heavy on the Harry Potter fandom, which is very much alive on TikTok. Fans are using reality shifting as a way to travel to Hogwarts and exist with characters from the books—mainly Draco Malfoy. A popular TikTok trend involves people inserting themselves into scenes with Malfoy, which actor Tom Felton recently acknowledged, so, perhaps, this is the next logical step.

There are also debunks about what reality shifting is and scripts for travels into your “desired reality.” There are multiple suggested methods for shifting, many of which involve counting, audio, or visualizing—widely used methods of creating an environment where your mind is relaxed. The “Eleven” method involves replicating the Stranger Things character’s blindfold, which helps her slip into other realities in search of poor Will Byers. Some shifters report seeing lights or feeling a temperature change. Others relate that you can’t get stuck or die in different realities. One video helpfully clarifies that you can’t lose your virginity while in your desired reality.

Outside of the Draco thirst, people have also pointed out movies that might be about reality shifting, like 13 Going on 30 and Inception. And there are a few parodies of the practice. But the shifters Vice spoke with also related that the community is largely a positive and “kind” one, which is helpful for people who might be attempting to manage trauma, depression, or anxiety. Still, who hasn’t fantasized about getting “railed” by a fictional character?