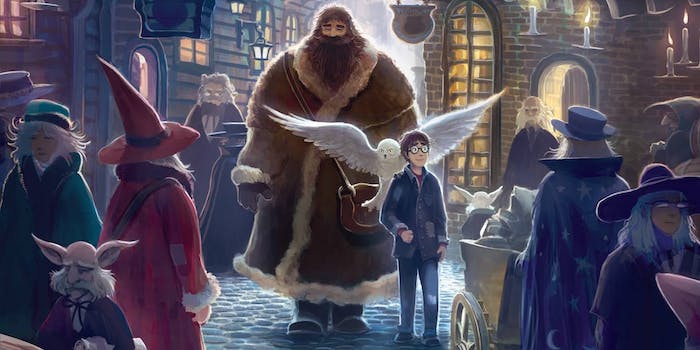 It's easier than ever to access the first book in the series.

J.K. Rowling is already permitting teachers to read the Harry Potter series aloud on video to their students without having to worry about copyright issues during the coronavirus pandemic, but now she and Wizarding World (a.k.a. the site formerly known as Pottermore) are making it easier than ever for fans to discover and revisit the series.

On Wednesday, Wizarding World announced the launch of Harry Potter at Home, a new initiative that aims to both allow children to experience the start of Harry Potter’s journey in new ways while offering a series of activities to keep readers engaged.

“For over twenty years now, Hogwarts has been an escape for all – for readers and fans, young and old,” a post from the Wizarding World team states. “During the strange times we now find ourselves in, we want to welcome you back to Hogwarts, where you will find a friendly retreat for you, your family and those you are caring for.”

That effort largely starts with the first Harry Potter book, Sorcerer’s Stone. OverDrive, the app that allows you to check out ebooks through libraries and schools, is offering Sorcerer’s Stone on the app to borrow and read throughout the month of April. The audiobook for Sorcerer’s Stone—the British version from Stephen Fry, not the American version from Jim Dale—is one of many titles available to listen to on a new Audible site offering free audiobooks to stream however many times you want.

Wizarding World is also offering word searches, quizzes, and a tutorial on how kids can draw a Niffler.

Harry Potter at Home is starting out small, but the longer we’re spending in quarantine, the more it has the chance to add more videos and activities to keep young readers occupied. And while Harry Potter was already a defining series for a generation of readers and kids are still discovering it everyday, Harry Potter offers a responsible way to escape into a world that’s much more magical.