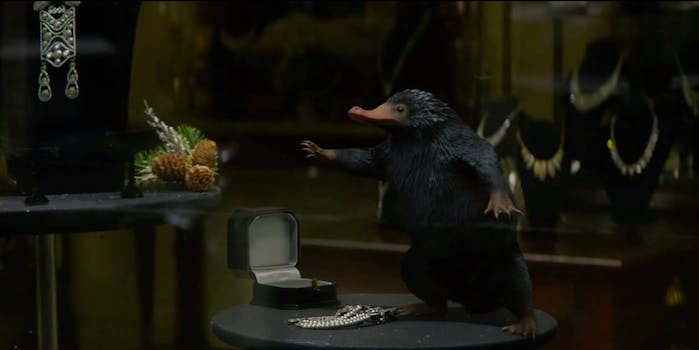 The niffler in ‘Fantastic Beasts’ is real—and adorable

Nifflers are real! Hang on to your valuables.

While some of the fantastic creatures in Fantastic Beasts and Where to Find Them are completely original creations, many have ties to the natural world.

Billywigs are essentially giant wasps, though their venom has curious magical properties, and demiguises share characteristics with the Japanese macaque (commonly known as the snow monkey). And while they didn’t appear in the movie, J.K. Rowling’s Fantastic Beasts textbook lists the Diricawl, better known as the Dodo (a real-life bird that muggles believe to be extinct even though wizards realize they just have the magical ability to disappear).

But what about the mischievous, coin-grabbing Niffler? It turns out this frustrating and lovable little critter has a real-world counterpart.

A trio of baby puggles have finally been born at the Taronga Zoo in Sydney, Australia https://t.co/GIzFb5zaUP pic.twitter.com/H3l088K3X4

These little guys are echidnas, one of the rarest animals in the world. The elusive marsupials are a kind of spiny anteater native to Australia, and are one of only two mammal species in the world that lay eggs. (The other is their equally awesome cousin, the platypus.) Echidnas are exceedingly difficult to breed in captivity, in part because we don’t know much about their mating rituals. But there must be something magic about these critters after all, because just in time for the release of Fantastic Beasts, the Taronga Zoo in Sydney announced that it had hatched the first baby echidnas (known as puggles) in almost 30 years.

The Taronga zookeepers have their work cut out for them making sure their three (yet to be named) little puggles grow up to be happy, healthy representatives of their species. And in the meantime, perhaps they should keep an extra close eye on their jewelry and wallets. We know Nifflers can’t resist the shiny stuff.