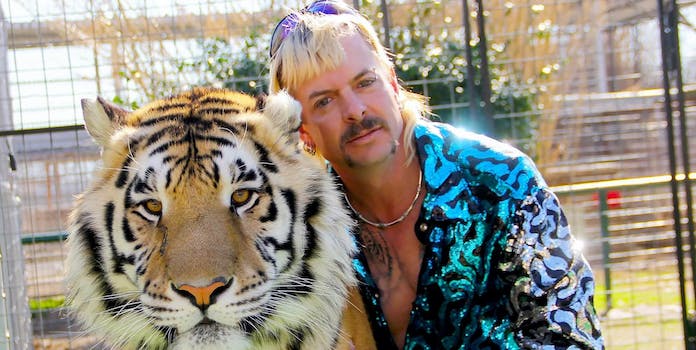 The docuseries focuses on Joe Exotic and other players in the industry.

Tiger King is a seven-episode rollercoaster that doesn’t stop launching off the edge of cliffs and into the land of the bizarre. Billed as the story of Joe Exotic, who describes himself as a gay, gun-toting, polygamist who runs an Oklahoma roadside zoo, Tiger King quickly becomes an examination of the big personalities and questionable operations in America’s big cat industry.

RELEASE DATE: March 20, 2020
DIRECTORS: Eric Goode and Rebecca Chaiklin
STREAMING: Netflix
’Tiger King’ is a tale of epic proportions and explores the dramatic and complicated world of big cat enthusiasts. No one’s a saint, and everybody’s a sinner—which is what makes ‘Tiger King’ such an intriguing ride.

The story is riveting and delves deep into the psyches of colorful roadside zoo heads and big cat enthusiasts. No one’s a saint, and everybody’s a sinner, which is what makes Tiger King such an intriguing ride. It’s the quintessential modern-day American tale: somebody is exploiting somebody else, and everybody’s really into whatever they’re doing for the monetary gains and power trip. This is a tale of epic proportions and the complicated web of relationships and egos in the big cat world.

The documentary does a splendid job of sketching out Exotic and the very complicated character he is. Episode 1 cleverly sets up Exotic the way he sees himself: a charming guy who thrives on attention, an entertainer with a heart of gold. He treats his animals well and also intentionally recruits those who don’t have many other opportunities into his work crew.

Later episodes carefully dissect the cultivated Exotic persona: his desire for attention makes up most of the reasons why he keeps big cats. And though he does treat his workers like a misfit family, not only does he criminally underpay them, he keeps them living in hazardous conditions. His workers even have to dig through the expired meats from Walmart’s donation meant for the cats to make a meal.

The owner of Big Cat Rescue (you may recognize the name from the company’s popular YouTube channel), Caroline Baskin, also gets an initial protagonist treatment. She’s a major force pushing for legislation banning the private ownership of big cats, which puts her directly in the crosshairs of roadside zoos like Exotic’s establishment. Exotic hates her vehemently, to the point where he is found guilty for hiring a killer to murder Baskin. (The plot behind Baskin’s murder is the climax of the series.)

Baskin, though, becomes a complicated figure, too. Sure, she loves big cats, but the Big Cat Rescue organization runs an unpaid volunteer system that seems to do a lot of the property’s upkeeping. The kicker is that Baskin is an actual millionaire and rakes in tons of money from ads on social media platforms, and she can ostensibly pay her volunteers who do a lot of work.

Exotic’s fellow big cat enthusiasts, like Bhagavan “Doc” Antle, get their moment in the spotlight, too. His operation is slicker than Joe’s and for that, feels all the more sinister. A polygamist, Antle has four wives that work over-time on the ranch, and it’s obvious there’s some strange power dynamics going on in that operation.

The constant thread linking all the characters is that no one seems to really care about big cats, or at least care about them in a way that matters. It’s all about power, ego, and personal vendettas. Exotic likes the attention and income, and Antle uses the zoo as a lure for women and exerts almost a psychotic control over his worker’s lives. Even Baskin, who claims she has the best interest of the cats in mind, sank time and energy into fighting Exotic in a prolonged lawsuit—rather than focusing on meaningful wildlife conservation efforts.

Tiger King is one wild adventure, and I cannot recommend it enough. Every person on-screen, from groundskeepers to the woman who spilled to details about Antle’s imposed working conditions, is a force of nature. We want to know more about each and every one of their lives and exploits. It’s truly a colorful story full of colorful people and is one of the best documentaries Netflix has released.