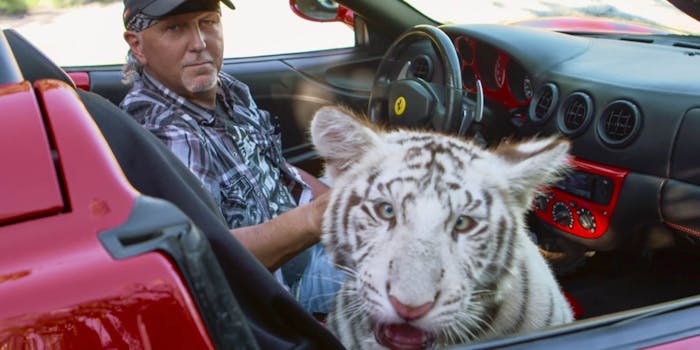 Is there a new ‘Tiger King’ episode coming out soon?

One of the main castmembers says he's filming a new segment with Netflix.

Netflix‘s Tiger King was an unexpected hit last month, arriving just in time to have a captive audience of people sheltering at home from COVID-19.

The documentary series delivered seven episodes of a morbidly fascinating drama about eccentric zookeeper Joe Exotic, and we assumed that was all we’d get. But according to one of the show’s main characters, another episode is on the way. Zoo owner Jeff Lowe spilled some details during a Cameo video, saying that Netflix was planning to film him “tomorrow” for an episode arriving “next week.”

As Variety points out, Netflix has aired reunion episodes for other shows in the past, including the reality series Love is Blind. This alleged Tiger King follow-up may have been in the works for a while. People are certainly curious about what happened happened after the documentary concluded, with Joe Exotic making the news last week after contracting the COVID-19 virus in prison.

However, now is a pretty weird time to film anything, never mind sending a film crew to new locations for in-person interviews. So far Jeff Lowe is the only source on this episode being filmed, and Netflix hasn’t confirmed or denied that it actually exists.