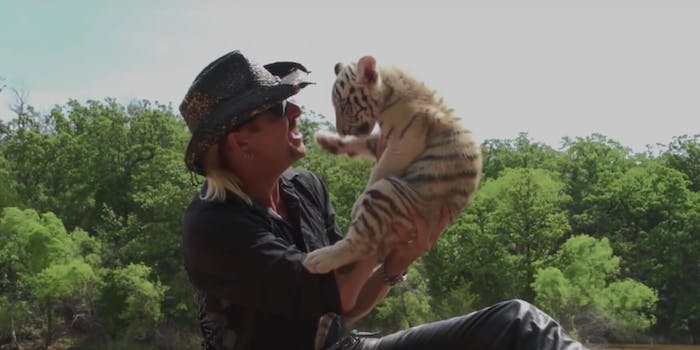 These ‘Tiger King’ memes are essential

'Tiger King' memes are getting people through quarantine.

Netflix’s Tiger King tells the unreal story of Joe Exotic, a gay Oklahoma zoo owner and big cat enthusiast who was also convicted in a murder-for-hire plot. That’s just scratching the surface of what actually happens in Tiger King; the parade of personalities and WTF moments ensure you can’t look away.

Naturally, this trainwreck has produced some amazing memes, as we shelter in place during a pandemic and attempt to absorb our reality through Joe Exotic.

There’s a whole meme subgenre for Carole Baskin, the Florida big cat enthusiast Joe antagonized and threatened online, and who is also suspected of killing her husband Don Lewis and possibly feeding him to tigers. The question of whether she did or definitely did has divided the internet.

SNL‘s Chloe Fineman did an amazing impression of Baskin that would likely be in the show if it were currently airing.

And people have already started dream-casting a movie version of Tiger King. (A limited series with Kate McKinnon as Baskin was announced last year.)

Dax Shepard is even actively campaigning.

For those who still have some questions after finishing Tiger King (and you will), Robert Moor, who produced a podcast about Joe Exotic, has some updates and trivia, including background on Joe’s 2016 campaign manager Josh Diall and reality show producer Rick Kirkham.