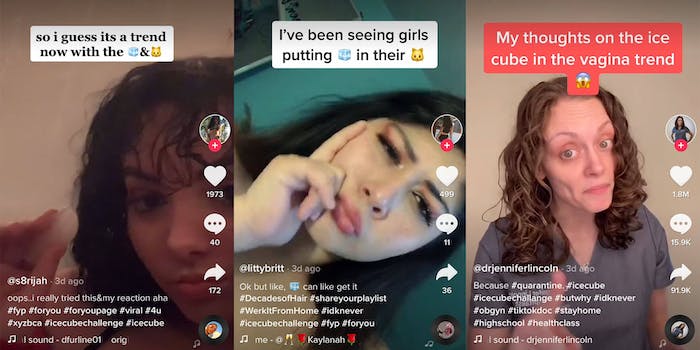 Gynecologists are warning against it.

There’s a new TikTok trend keeping teens occupied during the coronavirus pandemic and it’s… putting ice cubes up their vaginas?

The ice cube challenge, which has gained popularity on the short-form video app over the past week, features women filming themselves reacting to putting ice cubes up into their vaginas.

Why would people do this? Users have claimed the ice felt good, calmed them down, tighten their vaginas, and would help with vaginal infections.

The posts have been for the most part heavily criticized, even appearing on the Reddit page r/TikTokCringe.

Now gynecologists are jumping on the app to set the record straight about the potential risks and rewards of putting ice into your vagina.

Dr. Jennifer Lincoln, a gynecologist from Oregon explains in her video that a majority of what people are claiming about the effects of the ice are untrue and asks users to “stop and think before we do crazy stuff.”

Lincoln also told BuzzFeed that there is also a potential for injury with this challenge.

“The concern is you think of that kid in A Christmas Story who stuck his tongue to the flagpole,” Lincoln told BuzzFeed. “It can stick to the delicate skin of the vagina. It can cause an ice burn, and once the ice cube is actually removed, it can cause injury.”

Dr. Staci Tanouye, a gynecologist from Florida, got a little bit more technical in her video, explaining that the difference in the pH balance of water and of your vagina could potentially lead to an infection.

At the end of the day, it’s probably best not to put anything into your vagina that wasn’t designed to be there.