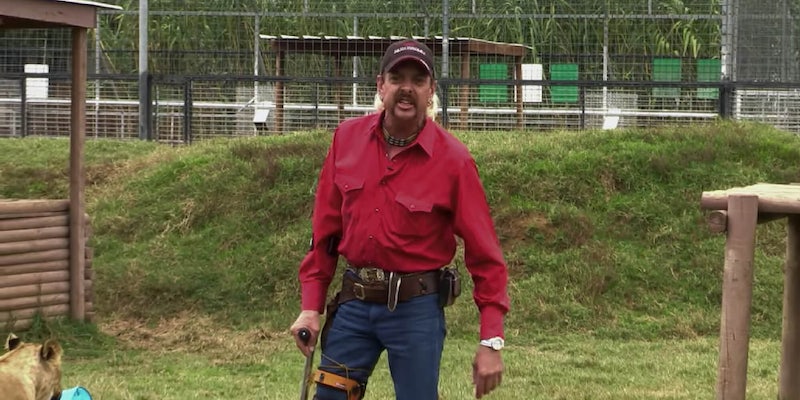 Cardi B wants him fed to the lions 'immediately.'

To absolutely no one’s surprise, Joe Exotic, subject of the new Netflix documentary Tiger King, is upset that he, a white man, can’t say the N-word.

Tiger King follows Exotic as he clashes with animal rights activists, runs for president of the United States as well as governor of Oklahoma, and eventually is arrested for his involvement in a murder-for-hire scheme.

Fans of the show quickly became obsessed with Exotic’s eccentric personality, though he wouldn’t be described as exactly likable. Now, a video has resurfaced of Exotic complaining he cannot say the N-word.

Absolutely no one was surprised.

“Were we watching the same show,” one Twitter user asked.

“Nothing about Joe Exotic told me he DIDN’T say the N word,” another Twitter user said.

Many viewers found Exotic’s behavior throughout the entire documentary deplorable and wanting to say the N-word was just another unsurprising aspect. In addition to allegedly abusing animals, Tiger King also alleges that Exotic gave his two husbands, who later in the documentary say they aren’t gay, drugs and gifts to coerce them into staying with him.

Cardi B, an apparent fan of the show, previously said she wanted to start a GoFundMe for Exotic to get him released from prison. She later clarified she was just kidding about the GoFundMe, and when she saw this video she officially renounced her love for Exotic.

“Feed him to the lions immediately,” she tweeted.

Exotic was eventually convicted for attempting to hire a hit-man to kill prominent animal rights activist Carole Baskin, an outspoken critic of Exotic who also appears in the documentary. He is currently serving 22 years.