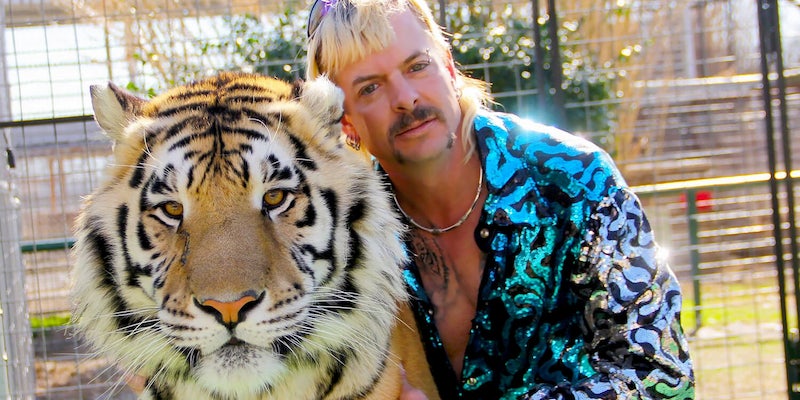 ‘Tiger King’ star Joe Exotic is getting a Discovery series

Have you seen Tiger King? Of course you’ve seen Tiger King! The scandalous Netflix true-crime series has captivated a nation, rocketing to No. 1 on Netflix’s U.S. list. With all parties looking to strike while the iron is hot, Tiger King star Joe Exotic will participate in a new Investigation Discovery series.

According to Variety, the new series, called Investigating the Strange World of Joe Exotic, will delve deeper into the life of Joe Exotic—real name Joseph Allen Maldonado-Passage—and his nemesis, Big Cat Rescue founder Carole Baskin, whom Exotic has accused of killing her first husband, Don Lewis.

A press release from Investigation Discovery touts the new show as “the investigation you didn’t get to see, revealing the secrets only Joe knows, the exclusive footage that has never been shown and the search to answer the one question every person in America is asking themselves right now: although she’s denied it, is Carole Baskin responsible for the disappearance of her husband, Don Lewis?”

Since its release on March 20, Tiger King has dazzled fans and critics alike, with the Daily Dot’s Jenny Zheng calling it “a seven-episode rollercoaster that doesn’t stop launching off the edge of cliffs and into the land of the bizarre.” But several of the show’s subjects have also criticized it: In a letter on Big Cat Rescue’s website, Baskin slammed the series for “being as salacious and sensational as possible to draw viewers. As part of that, it has a segment devoted to suggesting, with lies and innuendos from people who are not credible, that I had a role in the disappearance of my husband Don in 1997. The series presents this without any regard for the truth or in most cases even giving me an opportunity before publication to rebut the absurd claims. They did not care about truth. The unsavory lies are better for getting viewers.”

Exotic, meanwhile, was recently sentenced to 22 years in prison for charges including a murder-for-hire plot against Baskin. If Investigating the Strange World of Joe Exotic serves as any indication, the twisty yarn spun by the Tiger King cast has no end in sight.