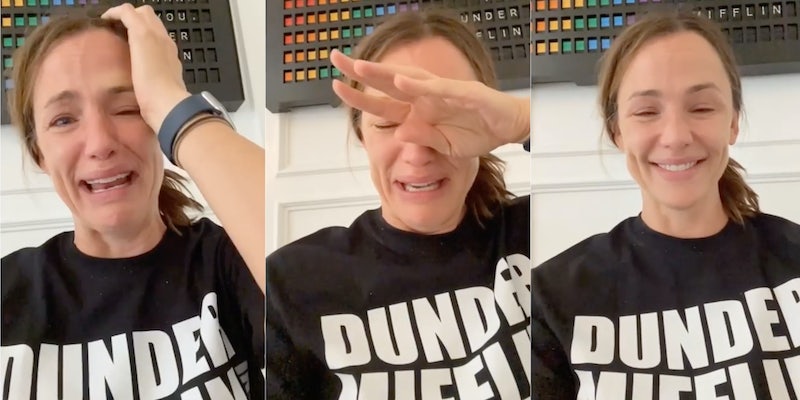 'It gave me some really big feelings.'

Jennifer Garner is one of the more relatable celebrities out there.

Since her days of starring in Alias and 13 Going On 30, Garner has shifted much of her daily focus to her family. The 48-year-old actress now spends most of her days being one of the most charming people on the internet. She talks to her baked goods, performs choreographed dance routines, and spends time with her three kids.

Over the last few months of quarantine, Garner and her kids have been binging every episode of The Office. A great idea, since the hugely popular series will exit Netflix at the end of this year. Yesterday, they finally polished off the very last episode, and Garner had some feels about it.

In a video uploaded to her Instagram, Garner shared her post-finale thoughts. And tears. Most importantly, however, she goofed in her attempt to upload a “farewell testimonial.” She accidentally shot the brief video in slo-mo, which gives her wholesome tears a whole new energy.

Garner realized her error before uploading the clip, but the video was too funny to be kept from the world. So, a quick voice-over and some charming quips later, we have yet another wonderful Garner moment to get us through the next few weeks of the pandemic. Thanks Jen.

The genuinely wonderful clip shows Garner, clad in a black Dunder Mifflin shirt, with a board reading “thank you Dunder Mifflin” in the background. Just as Garner begins speaking, the slo-mo cuts in, and the video switches to a voice-over.

“You’ll never guess which show my kids and I have been watching an episode a day of throughout quarantine,” Garner’s voice begins, as the slowed-down actress begins to weep in the background. “And guess what, we finished it. And guess what, it gave me some really big feelings.”

As slo-mo Garner continues to break down, the voiceover continues. “Oh bless her heart,” she giggles, referring to herself. “Oh my goodness, look who needed a big cry! And maybe a shower would’ve been helpful. But it’s nice to know you can still just feel so much passion about something, right? So thank you. If you’ve ever heard of this show The Office, you should try it. It’s wonderful.”

In one of the video’s most spectacular moments, the slo-mo then ends, allowing Garner to wipe her eyes one last time at normal speed. The video ends as one of Garner’s kids—and then Garner herself—utters one of The Office’s most memorable quotes: “bears, beets, Battlestar Galactica.”

Garner’s post quickly gained steam online. In the 12 hours since it was posted, the video has racked up 2,676,003 views. Several members of The Office cast even caught wind. In the comments, both Angela Kinsey, who plays Angela on the series, and Jenna Fischer, who plays Pam, gushed over Garner.

“I love this,” Kinsey wrote. “I love you and your family and just so you know the finale makes me bawl my eyes out too!”

Fischer couldn’t help but agree, and even threw out an invite for Garner to appear on her and Kinsey’s podcast, Office Ladies.

“Oh Lady,” she wrote. “This is the sweetest and most wonderful post!! Sending you lots of love and if you want to start over @angelakinsey and I are re-watching for the podcast. We are in the middle of Season 3 and have major feelings about lots of moments.”

Looks like its time to rewatch The Office. Again.