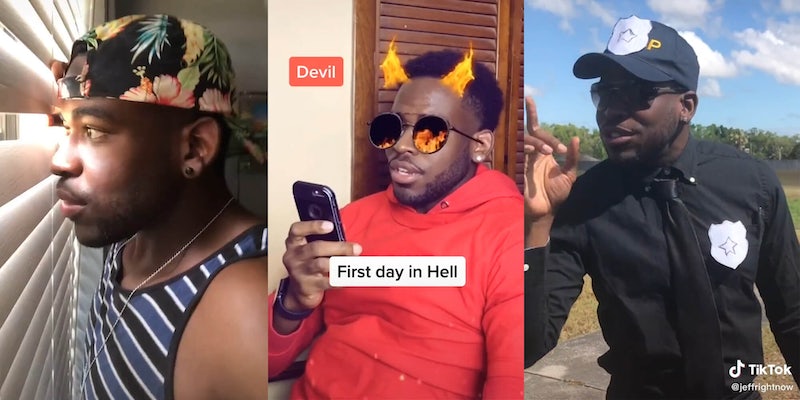 The comedian's alien video blew up, but it wasn't his first hit.

Earlier this month, Jeff Wright posted a TikTok in which he plays a human and two aliens looking to take over Earth. The conversation centers around our “used” planet and the casual absurdity of first contact, with one hell of a kicker.

The video went viral on Twitter, trailed by comments like “I’d watch this show” and “I’d be fine with the planet being taken over by aliens that look like that,” and it brought the word “questers” into the conversation. It got retweeted by Trevor Noah, and has more than 8.6 million views on TikTok. But Wright tells the Daily Dot the video wasn’t even “exactly all the way how I saw it in my head. In my head it’s a lot more detailed but I can only make three of myself.”

Still, it resonated, which might have something to do with a need for relatable humor during this extended period of isolation and grief. (The Pentagon essentially confirming that UFOs are real this week barely registered as news.) Wright says he was inspired by a movie where earthlings were trying to make contact with another planet.

“And I was like, that is a terrible idea. You don’t even know the alien’s intent. Why has no one stopped humans from talking to aliens? That idea evolved into, OK, let’s say it’s too late to stop people from talking to aliens. You were the first one to interact with aliens, and they had dialogue.” He laments that aliens are always portrayed as “so monotone and so dry.” Why not punch them up?

Wright utilizes the three or four-person format in his TikToks, playing all the characters in tightly edited scenes. He often uses the comparative format, personifying social media or music streaming platforms, brands, and airlines. It’s a common format on TikTok, where Wright has more than 1.4 million followers. (Last year user @keatsdidit went viral for his “If the planets had a meeting” TikTok.) Wright says the format is “easy to do, hard to edit. If I could I’d make 17 characters.”

One of his breakout videos was a sketch about logging into Gmail, in which he played himself and Google’s “security.” But his signature might be his series of videos from heaven, in which he plays God, Jesus, the devil, and versions of himself, typically kicked off by an awe-struck “Oh wowww.”

Wright, who resides in Orlando, has been doing standup comedy since high school, which helps with punching up and heightening. He writes a script for each video—“nothing crazy”—in order to get it to fit under a minute, and says he’s typically trying to act out what he’s already visualized.

Wright calls out Christopher Renois, Rich Black Guy, Ray the Great, and LeBron James’ sons Bronny and Bryce as some of his favorite creators, but adds it’s also a little “weird” to hear his audio on other people’s TikToks uncredited, which happens often on the app—the sharing of audio and sounds is one of its foundational features, though TikTok has also made an effort to label the “original” video. Earlier this month, Black creators voiced their frustration about original content getting overshadowed or co-opted.

Still, Wright says, “If you put out quality content, it will be seen on TikTok, for sure. That’s what I really, really love about TikTok. You can really do whatever you want and it’s gonna get seen.”

The comments on Wright’s TikToks—many of them calling for him to be verified—reinforce that. “I just want people to be happy,” he says. “That’s why I made these videos in the first place. …The fact that I act as all the characters, I’m always going to be the butt of the joke. So I hope everyone realizes that it’s all pure.”