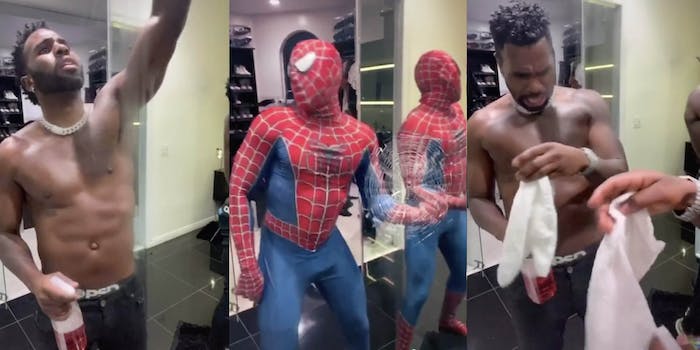 The “Wipe It Down” challenge on TikTok has blessed us with all sorts of creativity, and even some high expectations for the future of certain YouTube stars.

But for every online craze, there is always someone who comes along to take things to a new level. In an unexpected turn of events, in this case, that person is Jason Derulo.

The “Talk Dirty” singer shared his take on the challenge, which always features someone wiping down a mirror to the tune of BMW Kenny’s “Wipe It Down” until they somehow change appearances, over the weekend. And there is so much to unpack here.

First of all, Derulo probably could have been crowned the king of this challenge just by starting with his shirt off.

Of course, the main event is that he freaking turns into Spider-Man, with phenomenal special effects that are making the internet ready to burn down Sony’s door demanding yet another reboot with Derulo front and center.

“Jason Derulo gonna be the fourth Spider-Man,” one declared.

Obviously the main event is how thirsty everyone is after seeing the man, most famous for iconically singing his own name in basically all of his songs, in that, um, incredibly tight costume.

“Loved this one Jason! Great c*ck!” one user not-so-subtly wrote. Others renamed the app “DikTok” and joked that Derulo has a “TikTok premium pro+” account.

Derulo has famously run into problems(?) with his package before. Last year, he had a photo deleted from Instagram because simply posting a picture in his underwear was considered too graphic to meet community standards, thanks to his massive bulge. He also casually mentioned to Andy Cohen that Cats “CGI’d the dick out” in regard to his character, presumably to keep the movie family-friendly.

But while there’s plenty of editing at work for Derulo’s TikTok video, airbrushing his size down was clearly not a concern.

But can we also talk about the fact that he has what appears to be a vinyl copy of Taylor Swift’s reputation album on display in his closet?