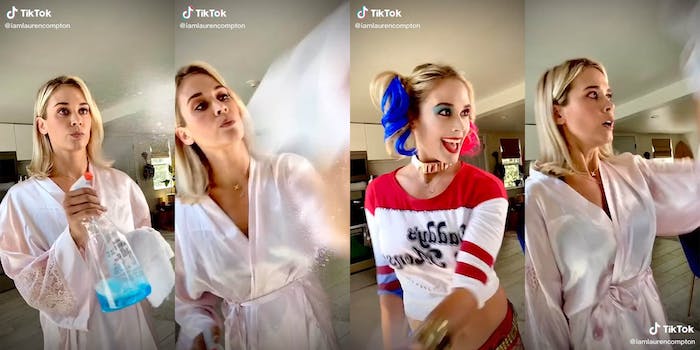 Here's why everyone is cleaning their mirrors on TikTok.

There’s a viral new TikTok challenge that doubles as an opportunity to do some cleaning around the house.

It’s called the “Wipe It Down” challenge, and its premise is simple: TikTokkers start off by wiping down a mirror with some sort of cleaning supply in time with BMW Kenny’s “Wipe It Down.” On the third or fourth “wipe,” TikTokkers scrub their way to an alternate reality in which they’re sporting a vastly different wardrobe.

Fox News credits comedian Lauren Compton with originating the “Wipe It Down” challenge last week, posting a video in which she goes from wearing a bedtime robe to donning full Harley Quinn makeup and attire for a split second. The video has earned over 21 million views and 2.6 million likes.

Apparently over 100,000 people have tried the “Wipe It Down” challenge since then, including several high-profile TikTok stars whose followers number in the millions. Among them are singer and beauty mogul Sterling Monett, makeup guru Abby Roberts, and film producer/Marilyn Monroe lookalike Jasmine Chiswell. Teen YouTube star and dancer JoJo Siwa even participated in the “Wipe It Down” challenge by ditching her signature bow and letting her hair down.

If you simply search BMW Kenny’s “Wipe It Down” on TikTok, you’ll find thousands of other videos by content creators taking part in the same viral trend.

Hopefully as these TikTokkers participate in the “Wipe It Down” challenge, they remember to actually give their mirrors a proper cleaning beyond those few broad strokes.