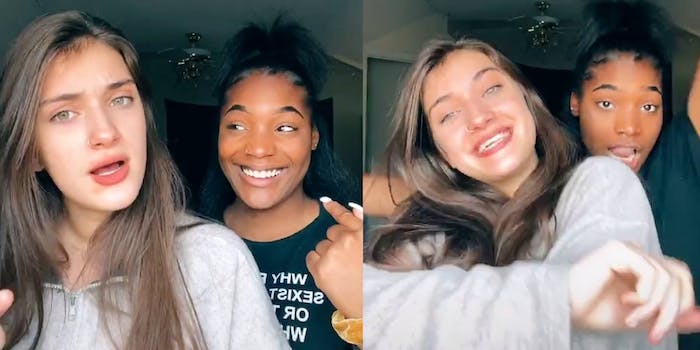 Coming out has never been so wholesome.

The act of coming out as a member of the LGBTQ community has become more and more creative over the years. Now, teens are using TikTok and a Jason Derulo song to do the deed, and the results are surprisingly wholesome.

The TikToks following the trend all feature a clip from Jason Derulo’s 2015 song “Get Ugly.” They zero in one line in the song that goes, “Oh my, oh my, oh my god. This girl’s straight and this girl’s not.”

As the lyrics begin, the queer teens point at their straight companion before pointing to themselves. For the most part, it works out like a charm.

Some participants appear unsurprised by the news, but many are visibly shocked. Joyful tears and laughter fill many of the videos’ final moments.

Unfortunately, not everyone understood the purpose of the TikTok. A few hilarious uploads show loved ones—typically parents—blissfully unaware of why they are being filmed. They dance and grin alongside their expectant children, completely missing the point.

There are some truly wonderful additions to the trend, but a few shine above the rest. One video shows two friends surprising one another by coming out at the same time. “We both came out and realized we both like each other,” user @tiarnie_marie wrote.

After the charming video posted—and earned a whopping 1.2 million likes—@tiarnie_marie posted an update. The TikTok explains that she and @brittanyskyx, the other girl in the video, had a long talk after filming. They decided to start dating, a decision that anyone who watched their video can’t help but rejoice over.