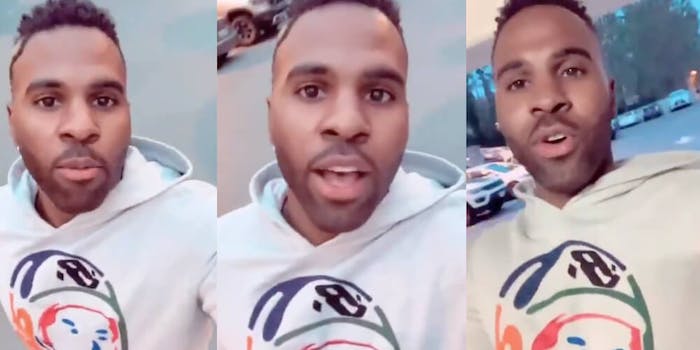 Instagram deleted a risqué photo of Jason Derulo—and he’s not happy about it.

On Tuesday, the singer shared a notice he received from the social media platform which claimed the photo–which showcased a scantily clad Derulo and his noticeably large package–violated community guidelines on nudity and sexual activity.

“Fuk u mean?” he captioned the new post. I have underwear on… I can’t help my size..”

According to E! News, the original photo of Derulo’s package was taken on a vacation in Bali and posted to the app last month. In the image, the singer is seen walking through steam wearing only black underwear. His—er—endowment is noticeably visible, and Derulo jokingly called his penis an “anaconda” in the comments.

“Don’t lie… did you Zoom?” he teased in the comments.

Derulo isn’t taking too kindly to the photo’s deletion.

“I have underwear on… I can’t help my size..” pic.twitter.com/OwJTxmvmLg

“Hey, listen, all these girls showing their ass and all kinds of crazy shit, and I have underwear on in Bali, and they took my pic down,” he continued. “It’s discrimination. Like, I understand, I can’t help my size, but you can’t take down my pic.”