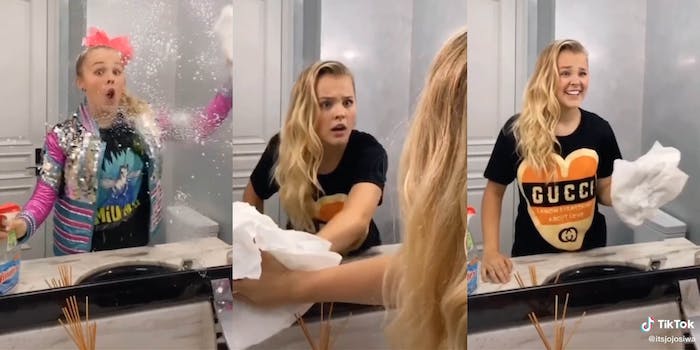 JoJo Siwa changed her look on TikTok, and the memes came rushing in

JoJo Siwa is no stranger to online criticism. The 17-year-old YouTube star and dancer—who is known for her giant hair bows, ponytail, and glittery makeup and outfits—has received a barrage of messages from haters telling her to “act her age.” On Monday, Siwa indulged those haters by letting her hair down in a cheeky TikTok video—and her fans are losing it.

Set to the tune of BMW Kenny’s “Wipe it Down,” the video shows Siwa wearing her signature bow and glittery jacket as she sprays her bathroom mirror. She goes to wipe the mirror down as the beat drops and poof—suddenly she’s wearing a Gucci T-shirt and letting her locks flow, sans bow. She ends the video by spinning and glancing smugly at the mirror.

It may not sound like much to the uninitiated, but to Siwa, it was a big deal. In 15 hours, the video has earned nearly 18 million views and 3.6 million likes. Plenty of “YAASSSSSSS,” “SLAYYYYY,” and “ICONIC” remarks abounded among the 96,000 comments.

The Jojo Siwa memes quickly flooded Twitter as well. Some people joked that with her contract about to expire, Siwa was free to flaunt a more grown-up look and truly wild out online. Others likened her new look to former child star Miley Cyrus, who adopted a more risqué image during her Can’t Be Tamed era and dialed it up about 10,000 notches on Bangerz.

And, because this is Twitter in 2020, some people decided to simp for the 17-year-old YouTuber.

For now, though, Siwa—who turned 17 today, mind you—is just having a little fun and acknowledging both her fans and haters. She can wear her hair however she pleases. Now please, for the love of God, try to be normal about this.