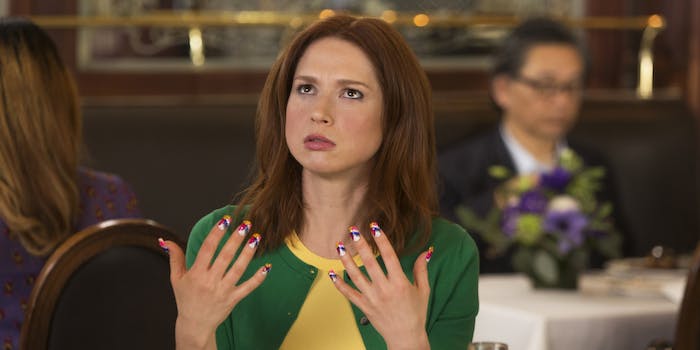 This week on the internet: Teen shoves bear, Ellie Kemper’s controversial past

On Monday, when many people across the country were enjoying the end of a three-day weekend, actress Ellie Kemper began trending on Twitter. The reason? Her involvement in a St. Louis debutante ball at the age of 19. Kemper was crowned Veiled Prophet Queen in 1999—a fact that had been previously unearthed. But this week, the Veiled Prophet Ball’s racist ties were brought to light and Twitter users dubbed Kemper a “KKK Queen.”

The discourse then became about whether or not the Twitter outrage machine was too harsh on the 41-year-old Unbreakable Kimmy Schmidt star. The Veiled Prophet was not the Ku Klux Klan, some argued, so it was incorrect to tie her to the KKK. Others made the case that the Veiled Prophet Ball was simply another, different organization that also had racist ties—like a lot of organizations and events do in America—and that the criticism was more than justified. As Atlantic reported in 2014, “to underline the message of class and race hegemony, the image of the first Veiled Prophet is armed with a shotgun and pistol and is strikingly similar in appearance to a Klansman.”

Kemper has not publicly responded to the ongoing discourse about her involvement in the ball, as of Thursday afternoon. The comment section on her latest Instagram post is now flooded with people asking her to speak out against her past. (She didn’t get back to us.)

Teen pushes a bear to save her dog in viral video

Many people tend to think of their pets as family members, which is why terms like “fur babies” are commonly used to describe our dogs and cats. In the latest example of this, a 17-year-old actually faced down a damn bear to save their dogs.

The footage was uploaded to TikTok on Monday by user @bakedlikepie, who captioned, “My cousin Hailey yeeted a bear off her fence today and saved her dogs. How was your Memorial Day?!”

In the clip, the bear and her cubs can be seen scaling a backyard wall as a larger black dog and several smaller dogs rush to the scene. Amid the chaos, the bear can be seen grabbing one of the smaller dogs, just as cousin Hailey rushes out. In what had to be a rush of adrenaline, Hailey shoves the bear off the wall, grabbing one dog and rushing back indoors along with the pack of dogs. Fortunately, neither bear nor dog was seriously harmed during the dangerous skirmish, and Hailey only suffered a sprained finger and scraped knee for their efforts.

Is Chris Hemsworth too ripped?

A photo of Hemsworth and Thor: Love and Thunder director Taika Waititi apparently set off this latest debate on the unrealistic body standards male action stars are held to.

The photo was meant to celebrate a wrap on filming for the upcoming Marvel movie, but people couldn’t help notice that Hemsworth appears to have gotten even more ripped for this role. Specifically his arms. Like, comically so. As writer Alex Zalben tweeted, “By the time they get to Thor 5, Chris Hemsworth is going to be nothing but biceps.”

It’s not just a Marvel problem: People pointed out Hugh Jackman’s increasing jacked-ness during his role as Wolverine and referenced Henry Cavill’s extreme dehydration on the set of The Witcher to prep his physique. Others pointed out Zac Efron being on the verge of tears after eating pasta in an episode of his Netflix travel show, and detailing how he went “years” without eating carbs.

Disney’s Cruella origin story is giving us a lot of good memes.