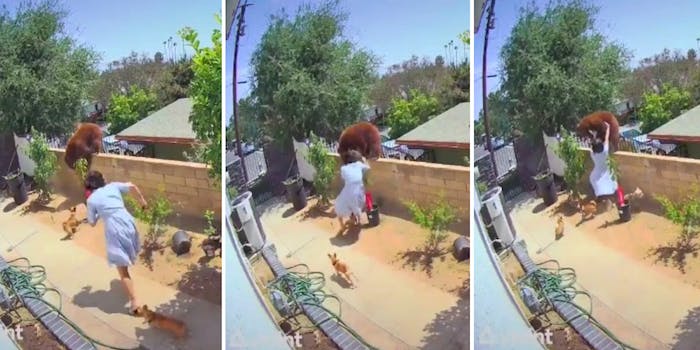 Teen pushes a bear to save her dog in viral TikTok

'SHE SHOVED A BEAR!'

Many people tend to think of their pets as family members, which is why terms like “fur babies” are commonly used to describe our dogs and cats. What’s more, pet owners will often risk life and limb to protect their beloved pooches, in particular, as no shortage of human interest stories can attest. In the latest to go viral, a 17-year-old actually faced down a damn bear to save their dogs.

The footage was uploaded to TikTok on Monday by user @bakedlikepie, who captioned, “My cousin Hailey yeeted a bear off her fence today and saved her dogs. How was your Memorial Day?!”

In the clip, the bear and her cubs can be seen scaling a backyard wall as a larger black dog and several smaller dogs rush to the scene. Amid the chaos, the bear can be seen grabbing one of the smaller dogs, just as cousin Hailey rushes out. In what had to be a rush of adrenaline, Hailey shoves the bear off the wall, grabbing one dog and rushing back indoors along with the pack of dogs.

Despite the high stakes, the whole thing is naturally set to the “Oh No” TikTok song—which is a remixed clip from the 1964 song “Remember (Walking in the Sand)” by the Shangri-Las.

You can also watch the video without music in a separate upload.

The clip quickly went astoundingly viral, amassing over 50 million views within 24 hours. It also went viral on Reddit and Twitter, where people began sharing it. “SHE SHOVED A BEAR,” aptly exclaimed one user in all-caps, while others had similar sentiments. (On TikTok, Hailey states that they go by she/they pronouns.)

In a follow-up video posted to TikTok, Hailey explained what was going through their head in the moment.

First of all, Hailey clarified that where they live in the mountains, bear sightings are not actually that uncommon. But after hearing their dogs bark, they went outside to check on them thinking it was probably another dog or a squirrel. “I’m like, ‘that’s a funny-looking dog,” Hailey quipped.

“And when I get there, the bear is like literally picking up one of my dogs,” Hailey continued. “So I go over and look the bear in the eyes, and the first thing I think to do is push it. Push a bear, push an apex predator. And to be honest, I don’t think I pushed her that hard, just enough to make her lose her balance, so she drops my dog and I run out of there!”

Fortunately, neither bear nor dog was seriously harmed during the dangerous skirmish, and Hailey only suffered a sprained finger and scraped knee for their efforts.

It goes without saying that most wildlife experts would probably advise against getting into a confrontation with a bear. But as we’ve seen you simply cannot underestimate a mama bear, even when that bear is a human.

Someone adopted Prancer the ‘demonic’ Chihuahua— after ad went viral