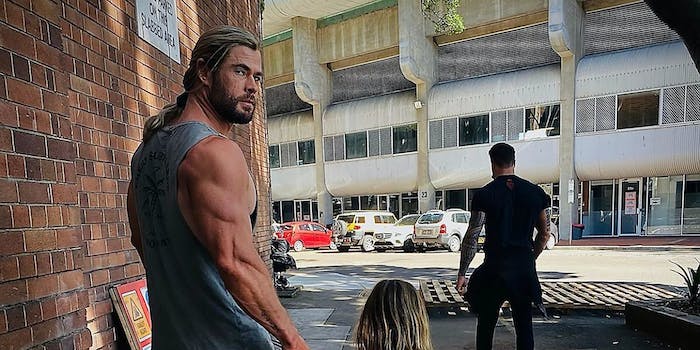 Is Chris Hemsworth too ripped?

A photo of Hemsworth and Thor: Love and Thunder director Taika Waititi apparently set off this latest debate on the unrealistic body standards male action stars are held to.

The photo was meant to celebrate a wrap on filming for the upcoming Marvel movie, but people couldn’t help notice that Hemsworth appears to have gotten even more ripped for this role. Specifically his arms. Like, comically so. As writer Alex Zalben tweeted, “By the time they get to Thor 5, Chris Hemsworth is going to be nothing but biceps.”

But that’s not good, right? Does he have to be this ripped to play a god, as some fans argued? Or has Marvel adhered to an unrealistic male body type that seems a little outdated now? Not to mention potentially dangerous to maintain?

Critic Angelica Jade Bastién posted a thread about this body type and included another recent Hemsworth photo to show how mega-ripped his arms are. “Like this is just some unhealthy expectations y’all,” she wrote. Writer Jake Cole commented: “Probably not good that an entire generation of actors is on steroid cycles to do blatantly awful and lopsided workout regimens just to stand in front of green screens and pretend to shoot lasers.”

There was similar discourse around the body transformation of Kumail Nanjiani, who got ripped for upcoming film Eternals, though there were more racist comments and accusations of steroid use in his case. Let’s not forget that Marvel turned Thor’s grief in Avengers: Endgame into a fat joke, though Hemsworth wore prosthetics for that role.

“They didn’t even handle THAT right but couldn’t wait to turn him into a human anvil. Smh,” wrote Clarkisha Kent.

It’s not just a Marvel problem: People pointed out Hugh Jackman’s increasing jacked-ness during his role as Wolverine and referenced Henry Cavill’s extreme dehydration on the set of The Witcher to prep his physique. Others pointed out Zac Efron being on the verge of tears after eating pasta in an episode of his Netflix travel show, and detailing how he went “years” without eating carbs.

Hemsworth was cast as Hulk Hogan in an upcoming Netflix biopic, which might explain why he’s so jacked, though late last year executive producer Eric Bischoff said the project is still in development, casting doubt on an upcoming release date.