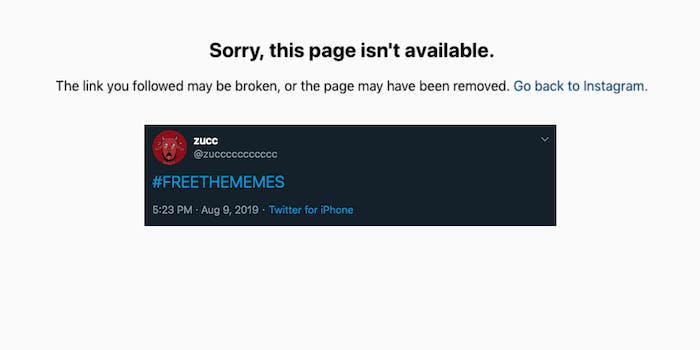 A new hashtag is being spread by meme enthusiasts across the internet following a purge of high-profile meme accounts from Instagram in July.

The campaign, dubbed #FreeTheMemes, has led hundreds of people to flood social media with demands that the affected accounts be reinstated. Some are even bombarding Instagram’s own Instagram account with #FreeTheMemes demands.

At least 30 prominent meme pages were deleted by Instagram for allegedly violating the company’s terms of service.

The pages, which held a combined 33 million followers, were accused of numerous violations, including the selling and purchasing of usernames.

“These accounts were disabled following multiple violations of our policies, including attempted abuse of our internal processes,” a Facebook spokesperson told the Daily Dot in an email at the time.

The memers and their fans are now demanding that the accounts be reinstated.

While it so far seems unlikely that the accounts will return, Instagram appears to be making moves to appease its meme-loving base.

Instagram has reportedly been looking to hire a new manager to act as a liaison between the company and its meme community. The move makes sense. Instagram told the Atlantic earlier this week that memes are shared seven times more often than non-meme related content.

Lila King, the head of Instagram’s news and publishing partnerships, told the Atlantic that the company hopes to learn more about memes in the coming months.

“We’ve seen, through the course of our work with publishers and creators, that the meme community has become really influential,” King said. “We think if we can get to know and understand [the meme community] there is a lot to learn that can influence the more traditional media companies.”

But are the platform’s biggest meme lords convinced that Instagram is making serious moves to fix their broken trust?

Memer @spicymp4, who claims to have had over 40 million followers before his account was deleted, recently told the Daily Dot that a meme liaison isn’t going to cut it unless the accounts are restored.

“It’s a good solution if they realise many accounts were false banned, reactivates them and the manager stops it from happening again,” @spicymp4 said.