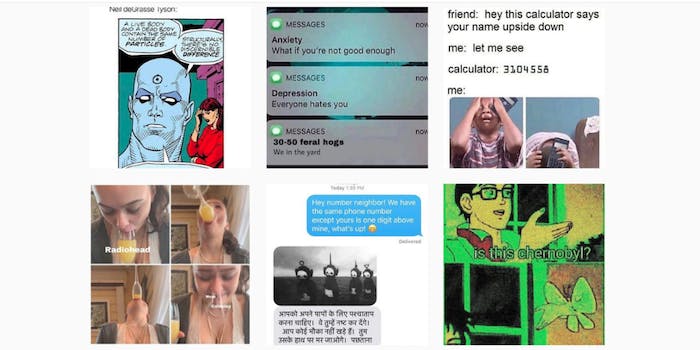 The company is trying to smooth things over with memers.

After a series of Instagram purges left dozens of seasoned meme page creators without accounts, Instagram announced it will hire a manager to act as a liaison between the company and popular meme accounts, according to the Atlantic.

In late July, at least 30 meme pages with a combined 33 million followers were removed for reportedly violating Instagram’s terms of service, including allegedly selling and purchasing usernames and fraudulent attempts to obtain others’ usernames.

“These accounts were disabled following multiple violations of our policies, including attempted abuse of our internal processes,” a Facebook spokesperson told the Daily Dot in an email statement at the time.

In the days leading up to the purge, Instagram wrote in a statement that the changes will “help us quickly detect and remove accounts that repeatedly violate our policies.”

The purge drew strong criticism from the meme account creators and their avid followers. Twitter user @spicymp4 said he lost over 40 million followers and $600,000 in revenue after the purge. His new Twitter bio reads, “bruh fuck instagram and rip spicy.mp4.”

In a Twitter video, which has amassed over 8,000 views, @spicymp4 said that communities, friendships, and incomes were all lost because of the purge.

“Not only was everyone left in the dark by Instagram, but nobody knows why this happened, and Instagram refuses to publicly acknowledge the deletion of their largest community,” @spicymp4 said. “And one of the most sad aspects is that nobody benefits from this all. It’s a shame that Instagram forgot about the community that brought their app life, but that’s the way it is. Each page had years of hard work put into it and a unique story.”

rt and like. we won’t go down without a fight. pic.twitter.com/JcHAoLQvSd

Followers of the meme accounts voiced their dismay as well, pointing out that it seemed illogical for Instagram to delete accounts that made the platform popular. Instagram told the Atlantic that memes are shared seven times more than traditional, non-meme content.

Twitter user @Skate2MyFuneral wrote that the purge “deleted a good amount of the meme pages I was following so now my feed is just real people and not ironic, crude and obscure humor and I hate it.”

When you start deleting the accounts that keeps your app alive #instagrampurge pic.twitter.com/h3sxIhEIwd

Instagram did a giant purge and deleted a good amount of the meme pages i was following so now my feed is just real people and not ironic, crude and obscure humor and i hate it

Instagram’s goal with its new strategic-partnerships manager seems to be to smooth things over with disgruntled users.

Update 7:55pm CT, Aug. 7: @spicymp4 told the Daily Dot what it will take for the new Instagram manager to smooth things over with him. “It’s a good solution if they realise many accounts were false banned, reactivates them and the manager stops it from happening again,” @spicymp4 said.

In an interview with the Atlantic, Lila King, head of Instagram’s news and publishing partnerships, said the new manager will serve memers on Instagram as well as identify new trends.

“We’ve seen, through the course of our work with publishers and creators, that the meme community has become really influential,” King told the magazine. “We think if we can get to know and understand [the meme community] there is a lot to learn that can influence the more traditional media companies.”

“Ideally we’d find someone who is equally fluent in the language of memes and the business of digital publishing,” King said.
The Daily Dot has reached out to @spicymp4.
READ MORE: