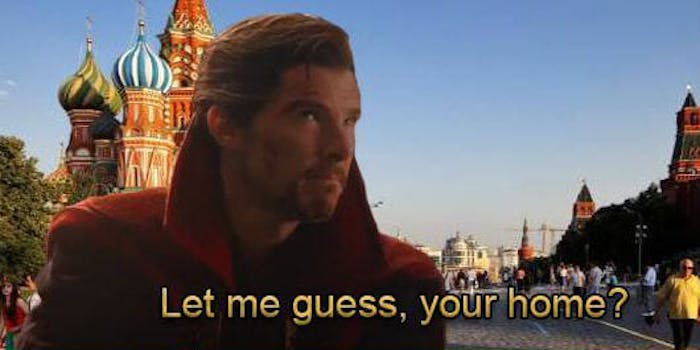 ‘Let me guess, your home?’ is the latest ‘Infinity War’ meme

The internet can’t seem to get enough of Marvel memes. Especially memes that reference pivotal scenes and funny moments from the April blockbuster Avengers: Infinity War. The latest one shows a scene between supervillain Thanos and Doctor Strange at the end of Infinity War. While talking about Thanos’ home planet, Titan, Doctor Strange asks Thanos, “Let me guess, your home?” Thanos responds, “It was, and it was beautiful” before showing him what the planet once looked like. Memers saw that moment ripe for parody, and creative edits started appearing on Reddit and YouTube last month.

There are many ways to meme the “Let me guess, your home?” scene. You can do a pun on the word home, and reference Benedict Cumberbatch’s other roles, such as his turn as Sherlock Holmes.

Or turn home into Homer Simpson.

A large majority of these Infinity War memes swap out the backdrop of Titan for a different place entirely.

Some people saw other characters in the complicated character of Thanos, finding connections in his sorrowful past with the Lorax or Aang, from Avatar: The Last Airbender.

Earlier this year, three other Avengers: Infinity War memes took over the internet. The first one arrived before the movie was even released. The news that so many characters were appearing in the film led to an obvious meme.

The jokes blew up from there. The “crossover” nature of the film was the primary zinger: Think putting all the Avengers in the same movie is ambitious? Clearly, you aren’t remembering some of these examples.

Marvel: 'Infinity War is the most ambitious crossover event in history'
Me: pic.twitter.com/NStBNq1ezx

Marvel: 'Infinity War is the most ambitious crossover event in history'
Me: pic.twitter.com/jmXmoIZr8z

Doctor Strange’s companion Wong was also turned into a meme after people began joking about his quick exit in Infinity War.

wong vs. everyone else in infinity war pic.twitter.com/XsiM7E5QGz

Wong during the fight scene in Infinity War https://t.co/matxMtnYm5

But it was the movie’s tear-jerker ending that inspired perhaps the biggest Infinity War meme. (Spoiler alert!) After Thanos collected all the Infinity Stones and snapped his fingers, many of our favorite characters were reduced to dust. With the help of Photoshop, people mimicked this effect in memes.

Using one of the movie’s final lines “I don’t feel so good,” people ruined all of our days with their depressing—yet somehow still funny–memes.

That one scene in #AvengersInfinityWar that had us all shook. “Mr. Stark, I don’t feel so good.” pic.twitter.com/PooBefxKI2

Fans have to wait until May 2019 for Marvel’s Infinity War sequel, so maybe that’s why they’re still overloading social sites with gags of all shades from this massively popular film. Until that sequel arrives, prepare for more memes.