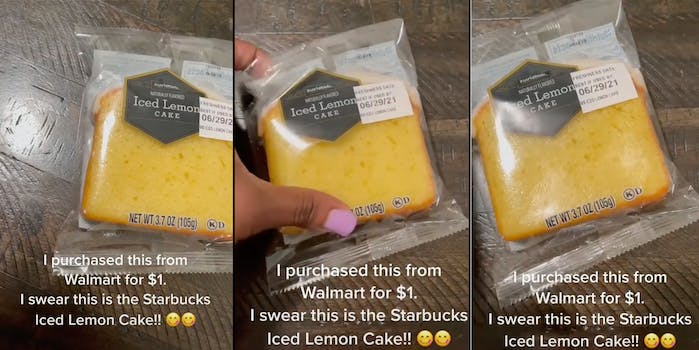 'This is the Starbucks iced lemon cake.'

Update 11:26am CT, July 16: When reached for comment, a Starbucks spokesperson told the Daily Dot in a statement that the Walmart lemon loaf and Starbucks lemon loaf are not the same. “Starbucks recipes are exclusive to the company, using high-quality ingredients and we continue to develop our portfolio of beverage and food items to meet customer needs. Starbucks Iced Lemon Loaf is a citrusy, buttery, moist lemon pound cake topped with a sweet icing,” the spokesperson said.

Initial story: A very to-the-point TikTok video has gone viral, thanks to the creator’s observation that an iced lemon cake available for just a dollar at Walmart is similar—perhaps even identical—to a lemon cake sold at Starbucks.

The TikToker, @itracynicole, posted the video to the platform several weeks ago, and nearly 200,000 views later, some people seem convinced of the theory.

The video itself is just seven seconds long, using Karter Zaher’s “I’m So Hungry” plus TikTok’s text-to-speech function to convey the message.

“I purchased this from Walmart for $1,” it says. “I swear this is the Starbucks iced lemon cake.”

Commenters also noticed the similarity between the dessert item featured in the video and what Starbucks stores offer as part of their pre-packaged food options.

Someone went into the comments to assert that the $1 cake costs $4.95 at Starbucks, and someone else asserted it was $3.25. There did seem to be general consensus, however, that the item in question was more expensive at the chain coffee shop than the chain retailer.

“No one’s yet realized how ridiculous Starbucks cakes and really just all of their prices in general are?” someone asked.

Another had a suggestion for the TikToker: “Buy one from Starbucks and put them side by side!”

Some theorized that the cakes were made by the same manufacturer and just packaged up differently for Walmart and Starbucks.

Others, however, swore they are different products, even though the appearance and packaging might be similar. “I think it actually tastes better than the Starbucks one!” a commenter remarked. “It’s more sweet and not as tart.”

Someone else, reading the responses, pledged to do a side-by-side taste test, while another thought the original TikToker should do just that as a followup and tag Starbucks in the video.