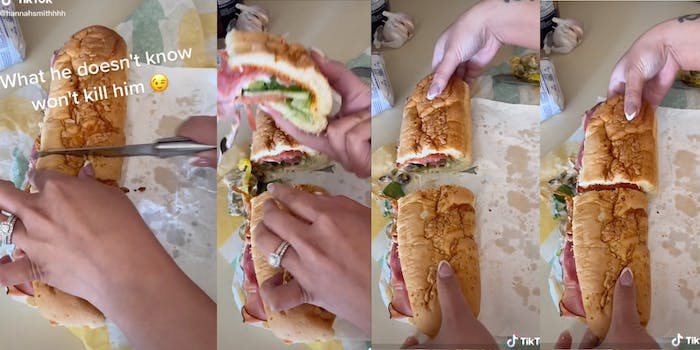 ‘If I knew someone did this to my food I would get so mad’: TikToker shows hack to stealing portion of Subway sandwich

A TikToker shared a video showing how to steal part of someone’s sub sandwich without them really noticing anything is amiss: Just cut a section out of the middle.

The unfortunate test subject is the TikToker’s significant other, however.

In the video, TikToker @hannahsmithhhh is cutting a sandwich from Subway down the middle as the text-to-voice effect says, “What he doesn’t know won’t kill him.” She then proceeds to slice a off a portion of the sub from one of the inside pieces and pushes the two larger pieces together, creating a slightly smaller sub and taking the portion for herself. The video ends with the TikToker’s unsuspecting significant other blissfully enjoying his sandwich.

The video has been liked over 600,000 times since being posted on Wednesday.

Viewers are stunned by the simple hack and are putting themselves in the place of the sandwich receiver. “If I knew someone did this to my food I would get so mad,” TikTok user @azzsulan wrote.

Others are sharing about the times they tried the hack on people they’ve made sandwiches for. “That’s what I would do to my kids subs and then I didn’t need to order myself one. It only worked a few times they caught on,” one said.

When another commenter said he felt guilty when doing something similar to his wife, the creator of the video said she let her significant other know what she did after the first bite and that he laughed about it.

The hack is not just effective for sandwiches, as another commenter noted.

“Omg I do this and I do it to pizza too,” @daniellemichelle88 wrote.

The pizza hack recently went viral. A pizza restaurant worker shared their “hack” to getting “free” pizza without customers noticing.

By taking a long slice out of the middle of the pizza, the person in the video was able to set it aside and smush the two halves together. The hack only slightly reduced the size of the whole pie before they cut it into a familiar eight slices.

The same hack, however, does not apply to drinks, according to the OP of the sandwich video. Another user shared that she steals some of her husband’s drink, something that is a little harder to cover up.

“I drink my hubby’s drink on the way home from picking up food and then fill it up with some water,” the commenter wrote.

OP said this was something she would definitely notice.