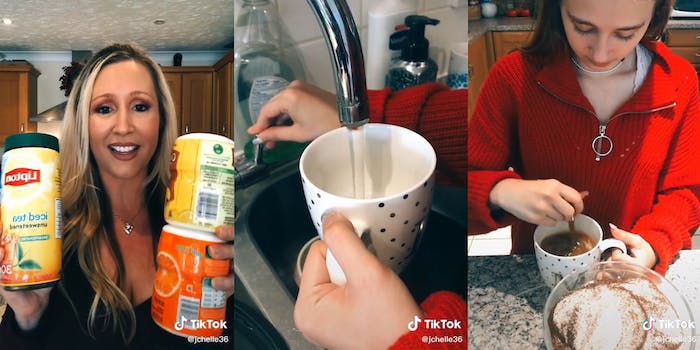 A TikTok about how to make hot tea has everyone shook

'I have never been more horrified.'

A viral TikTok has reignited the Twitter war between British and American tea drinkers, but even the American side has to admit the contents of the video are pretty horrifying.

The video began with the claim that she gets a lot of questions about hot tea.

She then goes on to demonstrate, with the help of her daughter, what exactly constitutes “tea” in their household. One cup of “instant tea,” one of lemonade powder, two cups of Tang, and then two cups of sugar––just in case the sugar in the Tang and lemonade wasn’t enough.

Oh, and a pinch of cinnamon and another of cloves just to finish it off.

People from around the world were horrified.

They came together to rag on the Americans.

People in the U.S. pushed back, saying they weren’t claiming the TikTok users nor her “tea” as American.

But others confirmed that this isn’t the work of a lone actor but an actual beverage multiple people willingly drink and even gift to each other under the moniker “Russian tea,” a 70’s recipe that bears no resemblance to any of the traditional Russian tea blends.

Complaints were made to The Hague, and even the police got involved.

Besides the tea recipe argument, the video also kicked off an endless debate of kettles versus microwaves.

One thing everyone can agree on, however, is that this is not the tea. Everyone except for the TikTok user that is.