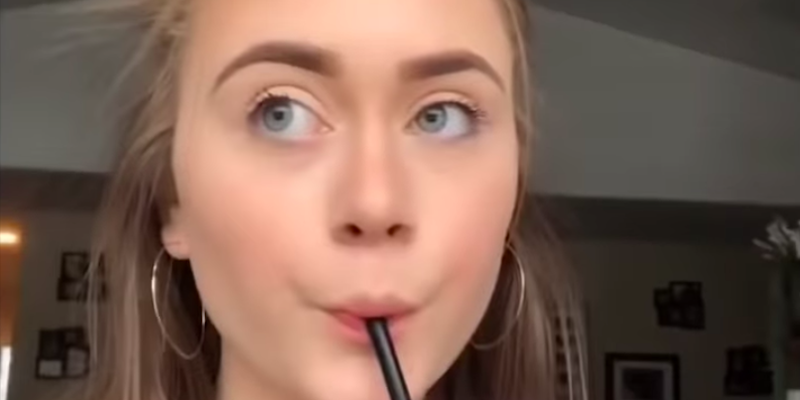 Sammie Lewis, better known as the “here’s the motherfucking tea” girl from TikTok is now a meme. Lewis is an 18-year-old student from Washington state who posted a TikTok video a few months ago titled “tea for you.” She starts the video by taking a sip of what appears to be Starbucks tea, swirls the ice around and says “ahhh.” She then taps her phone with long acrylic nails in between words, saying “here’s [tap] the motherfucking [tap] tea.”

If you’re not familiar with what Lewis means, she means she’s about to share some juicy gossip. Urban Dictionary’s top definition of tea dating back to 2003 states that it is “gossip or personal information belonging to someone else; the scoop.”

“The video blew up on TikTok so I just kept making more,” Lewis told BuzzFeed News. The audio from her TikTok video has been reused more than 50,000 times. People have started making their own versions that are even more exaggerated than the original.

People have replaced her famous tapping nails with bananas, Sharpies, and giant straws.

Lewis has seen the remakes and says a lot of them crack her up. “It doesn’t bother me at all. I think it’s really funny when people go ahead and make their own content, so why would I bash on someone who’s also trying to be funny and make a joke?” she said.

AAAAAAAAAAAAAAAAAAAAAAAA SO DO YALL RMB THAT BASIC WHITE GIRL SCREAMING “HERES THE MOTHERFUCKING TEA” WHILE SIPPING ON STARBUCKS. HERE’S AN EVEN BETTER ONE https://t.co/hZUSs3fu32

Some people are overwhelmed and are done sipping the tea Lewis has to spill.

My therapist: the “here’s the motherfucking tea” girl isn’t real, she can’t hurt you

But the real tea? What does her phone look like after so much tapping? One person on Twitter posted a picture of what they think is the result of the violent taps.