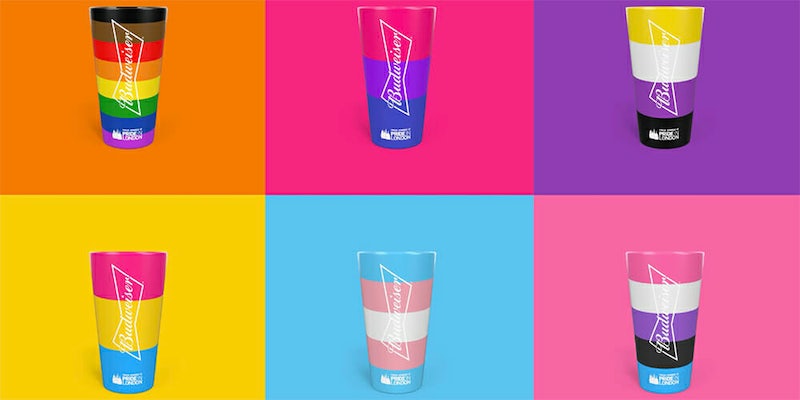 People are not happy.

A Budweiser UK campaign for Pride Month is using LGBTQ flags to advertise beer, and it’s inciting a wave of criticism across the internet.

The lager company announced its pro-LGBTQ Fly the Flag campaign on Friday, advertising beer cups with different colored flags on them to “celebrate the diversity within the LGBT+ community and Fly the Flag for everyone at the #PrideJubilee,” according to a tweeted announcement.

“Each person, and community, has different plights, fights and triumphs,” the announcement on Budweiser UK’s website says. “So this year, our Fly the Flag campaign, aims to make sure no community gets lost in the crowd. We are using our flag cups to celebrate and educate around different communities and their flags.”

Images shared to Twitter showed cups decorated with the rainbow gay Pride flag and other flags, including those that represent people who are transgender and asexual.

Excited to reveal we are now proud sponsors of Pride in London! We are working closely with them and our charity partners to celebrate the diversity within the LGBT+ community and Fly the Flag for everyone at the #PrideJubilee

A taste of what's to come… pic.twitter.com/g1FYlXqJJk

But the campaign was not well-received by some members of the LGBTQ community—nor by those who wish to ignore Pride Month altogether.

“Over the years, Prides around the country and probably the world have been so commercialized, it’s all about making money for companies and organisations,” user @Helenkeenan121 tweeted. “Saw it happening at London Pride many years ago. The reason I stopped going.”

None of this actually makes the beer drinkable.

At the end of the day, everyone is unique in their own special way and no one should be forced into an artificial category.

“Got to be one of the worst marketing campaigns ever,” @pipphin tweeted. “You’d have thought brands would want to move away from ‘pink is for femininity, blue for masculinity’ bullshit.”

Others who opposed the campaign seemed to do so because they oppose LGBTQ representation.

Stay the fuck out of politics and just sell a good product.

Where the hell is the straight flag….. oh wait that’s probably wrong for some reason I guess coming out as straight is more crazy than coming out as a asexual reproducing homosexual

The Democrats are right. We should ban corporate political speech. https://t.co/BrIPjtgHnx

Budweiser UK did not respond to the Daily Dot’s request for comment. The company said it partnered with nine charities—including Bi Pride UK and Stonewall Diversity Champion—to make sure “this impact lasts beyond Pride.”

TransPALS, another one of the charities Budweiser partnered with, tweeted a response to criticism of the commercialization of Pride symbols from the LGBT community.

“We have taken the decision to enter into a partnership,” the organization tweeted. “This will provide much needed funding and support to the South [London] Trans community.”

We know ppl in our community don’t like commercialisation. We have taken the decision to enter into a partnership. This will provide much needed funding & support to the South LDN Trans community. As, ppl are enjoying a Bud they donating & supporting the Trans community.

The response to Budweiser UK’s campaign feeds into a larger conversation already dominating Pride Month this year about how brands have commercialized symbols and platforms from the LGBTQ community while not consistently supporting it.