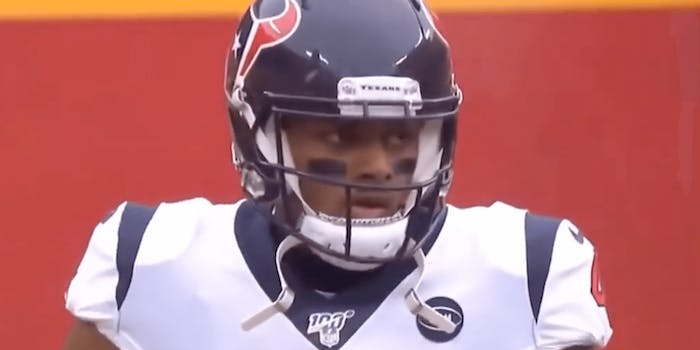 The collapse of the Houston Texans is now also a meme

The internet would definitely not allow the Texans' collapse to go unpunished.

Imagine being the underdog Houston Texans coming into Kansas City to meet the Chiefs, in Arrowhead Stadium. You’ve blown the doors back with a quick touchdown connection from star Deshaun Watson to the speedy Kenny Stills. You’ve capped a 24-0 run to jump-start the game, with a Ka’imi Fairbairn 31-yard field goal.

Congratulations to the Houston Texans! pic.twitter.com/mDPugqQbX8

And then you proceed to choke it all away, allowing 41 unanswered points–highlighted by a special teams failure that led to a Chiefs score, and a completely unnecessary fake punt that brought it all down. Even worse, your team would lose by 20, 51-31.

This failure, the unfortunate end of the historic loss, is living today as a Texans fan. Of course, the memes came on with a great vengeance and unmitigated pettiness.

Gotta have the Spice Adams burn:

Then, the Mario Kart edition:

Going directly at the Texans coaching staff was a must:

Then, imagine your collapse also being the most-watched game on CBS in four years, to the tune of 35 million viewers.

Long the second-most-popular team in the Lone Star State, the Texans made the most of their moment in the spotlight.