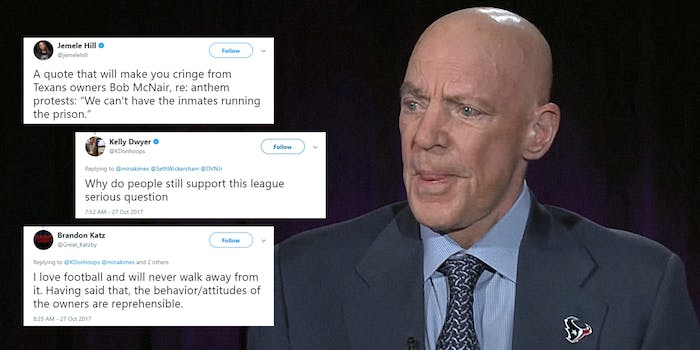 'We can't have inmates running the prison.'

Add Houston Texans owner Bob McNair to the number of white men in sports making offensive comments about NFL players taking a knee against racism. When discussing his dislike of the players’ protests, McNair said, “We can’t have the inmates running the prison.”

McNair made his remark in a closed-door meeting between the NFL’s executives and team owners, as the league figures out how to “handle” the growing number of players moving to kneel during the national anthem. NFL executive Troy Vincent particularly took offense to the comment, the Daily Beast reports, which led to an argument between Vincent, McNair, and the Dallas Cowboys’ owner Jerry Jones.

While some owners have taken a moderate response to the issue, owners such as McNair and Jones feel kneeling is inappropriate on the field. It should be also noted that McNair donated millions to the presidential campaign of Donald Trump, who has vilified the NFL protests.

Shortly after McNair equated kneeling NFL players to “inmates,” fans responded to the owner’s comment, with some pointing out the racist power dynamic of Black players being compared to inmates or slaves who the owners possess full control over.

A quote that will make you cringe from Texans owners Bob McNair, re: anthem protests: “We can't have the inmates running the prison.”

Hey @HoustonTexans I’m a fan & am pretty disgusted with our racist owner Bob McNair. I support our players and I hope they all take a knee.

What he really meant was: pic.twitter.com/jdMbRWoZvP

McNair has since apologized for his comments, claiming that he “regrets” the expression he used.

“I never meant to offend anyone and I was not referring to our players,” McNair said, according to a statement put out the team’s PR department. “I used a figure of speech that was never intended to be taken literally. I would never characterize our players or our league that way and I apologize to anyone who was offended by it.”

Not everyone is ready to forgive McNair after his apology, however. Some were skeptical of his intentions. Others thought he was simply trying to save face.

He knew what he meant and who he was talking to. There’s no gray area in his statement or intent. Just own it if that’s how you feel

The NFL’s relationship with kneeling players remains an ongoing issue as #TakeAKnee continues to trend. It doesn’t help, either, that Trump fans are ready to wage an all-out war against the league amid protesting players.