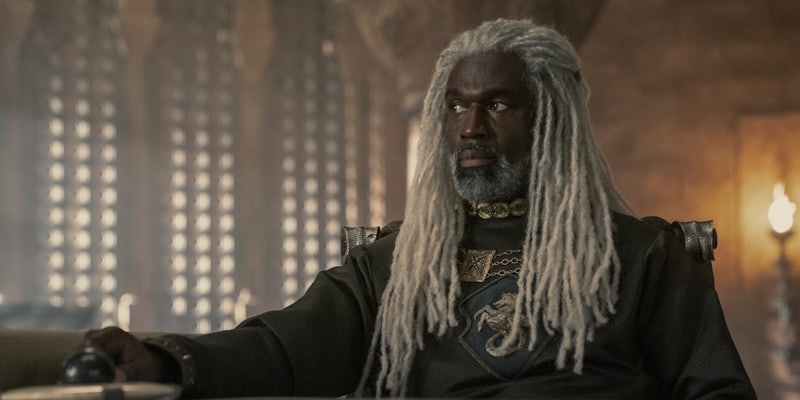 A nonentity in 'Game of Thrones,' a look at the prequel's major player.

Warning: This article contains spoilers for House of the Dragon episode 2.

House of the Dragon’s second episode is set about six months after Queen Aemma Arryn (Sian Brooke) died from a barbaric cesarean section, which King Viserys Targaryen’s (Paddy Considine) small council thinks is enough time for him to remarry and produce a son. But amid the crisis of just who Viserys should marry next—and Rhaenyra’s (Milly Alcock) grasp on the throne already starting to slip—gives one of the ancient houses its moment in the spotlight.

Corlys Velaryon (Steve Toussaint) already made an indelible mark on audiences as Viserys’ master of ships and, as someone still bitter about the fact that the Great Council of 101 AC passed over his wife Rhaenys (Eve Best) for Viserys because Rhaenys was a woman, the ultimate wife guy. But if his wife cannot have the throne, Corlys will opt for the second-best option: He proposes that Viserys marry his daughter Laena (Nova Fouiellis-Mosé). He argues that, along with their shared Valyrian ancestry, it would show Westeros that “The Crown’s strongest days are ahead, not behind” and counter the perception that the crown is weak. It’s harsh reasoning given that it’s only been six months since Aemma’s death, but he’s just being practical while working in self-interest.

Viserys weighed his options, and throughout the episode, we’re reminded of what Corlys has to gain with this potential wedding. He’s already one of the wealthiest men in Westeros, which would help the crown. It would also allow Corlys more leverage to deal with the growing threat of Craghas Drahar and the Triarchy over in the Stepstones, a group of islands in-between Westeros and Essos, that poses a major threat to Corlys and his fleet. In return, Laena would help Viserys adhere to House Targaryen’s mission to keep its bloodline pure with any children they’d potentially have. (Laena, who is 12, is told by her mother that if they married, she wouldn’t have to bed the king until she is 14, which is still rather grim.) And, his advisors tell him, Corlys isn’t exactly someone Viserys would want to slight.

As Rhaenys tells her cousin Rhaenyra, no matter who Viserys chooses, the end goal will be the same: To put a king on the throne instead of Rhaenyra.

“Whether it’s to my daughter or to someone else’s, your father will remarry, sooner than late,” Rhaenys said. “His new wife will produce new heirs, and chances are better than not that one of those will be male. And when that boy comes of age and your father has passed, the men of the realm will expect him to be heir, not you. Because that is the order of things.”

But Viserys doesn’t want to marry Laena. By the episode’s end, he chooses to marry Alicent Hightower (Emily Carey), who’s been a comforting presence to him for months—thanks in part to her father and Viserys’ hand Otto (Rhys Ifans) putting her in that position—instead. Corlys isn’t pleased by this turn of events. “This is an absurdity,” he says before he storms out of the small council meeting. “My house is Valyrian, the greatest power in the realm.”

The other Valyrian house

In Fire & Blood and A Song of Ice and Fire, House Targaryen wasn’t the only family from Valyria to escape the Doom: House Celtigar of Claw Isle, and House Velaryon of Driftmark were the others. Until we meet someone from House Celtigar in House of the Dragon—and with Corlys framing the Targaryens and the Velaryons as “the two great surviving Valyrian houses” in offering Laena as a bride, we might not see the Celtigars at all—we really only need to know about the Velaryons.

“House Velaryon’s origins reach back to Old Valyria,” Corlys explained to Daemon Targaryen (Matt Smith) at the end of the episode. “More ancient even than House Targaryen, according to some texts. But unlike the Targaryens, we were no dragonlords. For centuries, my house had to scratch out an existence from the sea with grit and luck.”

It’s not known exactly when House Velaryon settled into Westeros, but House of the Dragon co-creator George R.R. Martin says they arrived before the Targaryens. But time doesn’t exactly matter, Corlys acknowledged, which family arrived first in Westeros if one of them has command of dragons.

By Aegon the Conquerer’s time, the Velaryons were well-established as master sea lords in Westeros who had a great command of the sea; their house sigil is a seahorse. Three of Corlys’ immediate ancestors served as the master of ships to a Targaryen king, the same role that Corlys has now, noting the family’s talents on water.

Unlike House Targaryen, the Velaryons aren’t all but extinct by the time we get to the era of Game of Thrones and ASOIAF. But they’re essentially nonentities in both of those stories: The Velaryons don’t show up in Game of Thrones at all, and they’re among Stannis Baratheon’s supporters in ASOIAF. They’re akin to relics of a bygone era, although Cersei Lannister noted in A Feast For Crows that when it came to the Velaryons, “some had the same silvery hair as the dragon-kings of old.”

A noble house linked by blood and marriage

Unlike their fellow Valyrian brethren, the Velaryons don’t appear to engage in incest when it comes to marrying off their children. But there is one exception: Whenever a marriage involves a Targaryen.

Throughout the Targaryen dynasty, they mainly married each other. But it wasn’t always possible: Sometimes, a family might have only had sons or no relatives who could marry one another; other times, there was enough of an age difference that the older Targaryen was already wed to someone else by the time the younger came of age. To recall one example far in Westeros’ future, Rhaegar Targaryen, with no sister to marry—Daenerys wasn’t born yet—wed Princess Elia Martell of Dorne.

For the Targaryens of old, their house of choice was Velaryon. The mother of Aegon the Conquerer and his sister-wives Visenya and Rhaenys was a Velaryon with additional Targaryen ancestry on her side. The second Westerosi king, Aenys I (the son of Aegon and Rhaenys), married Alyssa Velaryon. Alyssa’s youngest daughter by her second husband, Jocelyn Baratheon—who Alyssa would die giving birth to—would marry Aemon Targaryen, the eldest son of King Jaehaerys I Targaryen, and their daughter Rhaenys would marry Corlys. (And, so far, would become by far the healthiest marriage on House of the Dragon.)

And now Corlys has his eyes on weaving Houses Velaryon and Targaryen together once again with one of his children.

When an advisor gives his take to Viserys about marriage to Laena, he tells the king she’s a solid choice because she is of “unimpeachable Valyrian stock and has Targaryen blood.”

Why is House Velaryon so wealthy? Thank the Sea Snake.

Even with the amount of fame House Velaryon had and their family ties to House Targaryen during its peak, Corlys is something of a unique presence; there’s a reason that out of all of the House of the Dragon characters who could get a spinoff prequel, it’s Corlys with one in the works.

“When I ascended the Driftmark throne, I knew what I wanted,” Corlys told Daemon. “So I went out and seized it. Unlike every other lord of the realm, I can say that I built my house’s high seat with the strength of my own back.”

A naturally skilled captain, Corlys had already sailed to many of Westeros’ ports—including a failed attempt to find a way around the northern part of Westeros after sailing north of the Wall—when he built a ship to travel to Essos. (His nickname, the “Sea Snake,” came from the name of that ship.) And over several years, all of which fall before the events of House of the Dragon, Corlys traveled to the far ends of the earth, and sometimes he was the first person from Westeros to visit a location in Essos.

He purchased 20 ships and loaded them with gold and treasures during his final voyage to Essos, and while not all of them made it back, he brought back enough to turn House Velaryon into the wealthiest house in the Seven Kingdoms. He also bought elephants, but none of those made it to Westeros.

The rejection of Laena Velaryon, in Corlys’ eyes, is an insult. But it also means that Corlys’ next move could either bring peace to the realm or throw it into even further chaos.