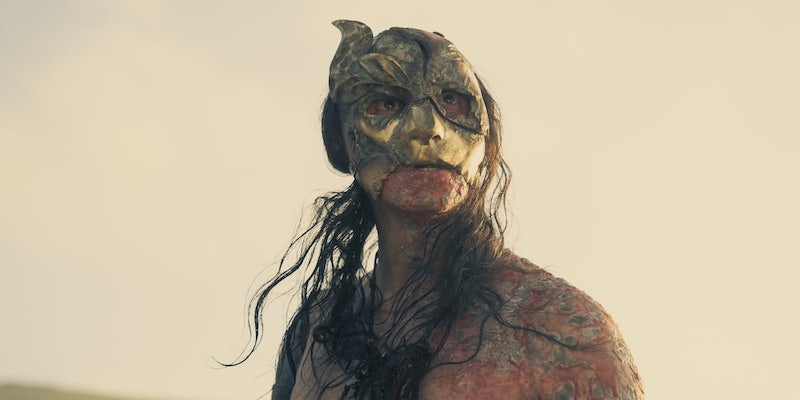 Who is Craghas Crabfeeder, the masked adversary in ‘House of the Dragon’?

He's got a specific method of taking out captured sailors–and he's a threat for some Westerosi players.

Warning: This article contains spoilers for House of the Dragon episode 2.

House of the Dragon is bringing the focus back to politics and palace intrigue, but even when the Small Council’s debates and concerns revolve around King Viserys I Targaryen’s (Paddy Considine) next wife, a new masked foe looms just outside of Westeros.

Episode 2, “The Rogue Prince,” is bookended by a reminder of the outside threat to the Seven Kingdoms. The episode opens as we witness a man being eaten alive by crabs on the shore while a ship in the distance burns. One of those ships, we’re told by Corlys Velaryon (Steve Toussaint), belonged to him, and he wants action from the Crown to take out a Myrish prince-admiral named Craghas Drahar (Daniel Scott-Smith), who’s also known as Craghas Crabfeeder or simply the Crabfeeder.

“I want to seize the Stepstones by force and burn out this Crabfeeder,” Corlys says to the Small Council.

He’s left unsatisfied on multiple fronts. Viserys doesn’t want to start a war with the Free Cities, which are almost certainly funding Craghas Crabfeeder. Doing so, Master of Coin Lyman Beesbury (Bill Paterson) is unprecedented and would likely result in “incalculable” loss. And Rhaenyra’s (Milly Alcock) suggestion of sending out dragonriders is also rejected, even though Corlys is open to it. The Small Council instead would rather focus on getting married again so he can have a son as quickly as possible.

By the episode’s end, Corlys, insulted by Viserys’ choice to marry Alicent Hightower (Emily Carey) instead of his daughter, has returned to thinking about the Stepstones. If Viserys won’t make a move on the Stepstones, then Corlys will, now with an unlikely ally on his side: Daemon Targaryen (Matt Smith).

But to get into the Crabfeeder of it all, we need to peel back a layer on some Essos politics.

What is the Triarchy?

Mentioned in passing in the first episode but explored more in “The Rogue Prince,” the Triarchy is an alliance between Tyrosh, Lys, and Myr, three of the nine Free Cities of Essos that lasts for more than 30 years. The Triarchy will eventually have a role to play in the upcoming Dance of the Dragons before infighting leads to the dissolution of the alliance.

Tyrosh, Lys, and Myr are located fairly close together near the southwestern tip, putting them close to Dorne, which wasn’t yet a part of the Seven Kingdoms. But nestled in-between Westeros and Essos—and in the middle of a trading route that gives sailors from both continents access to each other, particularly King’s Landing access to seaports like Oldtown and Lannisport—is the Stepstones, a group of islands mostly known for being a haven for pirates.

The Triarchy initially formed to fight against Volantis, but they also set their sights on the Stepstones to clear out the major piracy problem; given their location in Essos to the Stepstones, it likely would’ve been a major issue for Tyrosh, Lys, and Myr. So they employed Craghas Drahar to take care of the problem. And so they did, and Craghas’ name came from his method of disposing of pirates: According to Fire & Blood, he “staked out hundreds of captured pirates on the sands, to drown beneath the rising tide.”

It’s also what Daemon knows about the man when asked by Corlys.

“Some Myrish Prince is feeding Westerosi sailors to the crabs,” Daemon explains.

For a time, everything was peaceful. The pirates were gone, Craghas and his men charged a toll for anyone wishing to pass through, and Westerosi sailors were all too happy to pay it. But then Craghas and his men raised the toll high enough that people could no longer pay it and attacked those who couldn’t. He’s also taking his moniker literally by letting the crabs feed on captured sailors, which House of the Dragon shows in detail.

House of the Dragon is simplifying the conflict a bit by making it appear that Craghas—who is depicted wearing a mask and having been afflicted with greyscale—is someone who’s attacking Westerosi ships because he (and the Triarchy at large) believes that the Crown is vulnerable. But more importantly for Corlys, Craghas serves as a threat to his enterprise.

“I have been petitioning the King to send my navy into the territory, but he’s denied me…” Corlys says. “The Crabfeeder is backed by powerful entities within the Free Cities who wish to see Westeros weakened. And the King’s failures have allowed him to accumulate strength. If those shipping lanes fall, my house will be crippled. And I will not have Driftmark beggared while our King idles himself with feasts, and balls, and tourneys.”

The episode ends with an alliance between two men who previously butted heads: Corlys, whose fleet is the most powerful in Westeros, and Daemon, who has command of his dragon Caraxes. And above all else, the drive of at least one former heir cast aside who may want to show what he’s capable of, even if neither of them ever actually got permission from Viserys to fight in it.

“Waiting in the Stepstones is a chance for you to prove your worth to any who might yet doubt it,” Corlys says. “We are the realm’s second sons, Daemon. Our worth is not given. It must be made.”

The War for the Stepstones only takes up a handful of pages in Fire & Blood, a small stone in the molehill that is the major Targaryen conflict to come. But what something like House of the Dragon allows is more exploration and, in a show that hasn’t had too much of it yet, at least one splashy action scene.