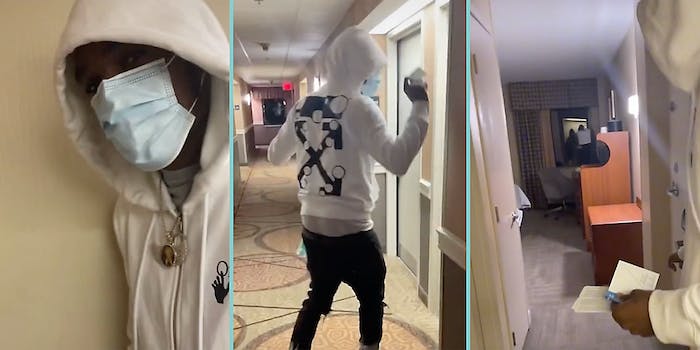 ‘Would you rather sleep at the airport?’: Couple complains about free hotel after American Airlines cancels flight in viral TikTok, sparking debate

A viral TikTok video featuring a couple complaining about the hotel room American Airlines provided them after canceling their flight sparked a debate.

User @maiabryson filmed and posted the video of her and her partner entering a hotel room, allegedly provided to the couple after their American Airlines flight was canceled. The text overlay reads: “The room American Airlines gave us after canceling our flight.”

In a highly sarcastic tone, her boyfriend says, as he puts the card to the keypad, “I do it with the best of the best for my babe. You feel me? Five-star shit.”

He opens the door to enter the room. He pauses, and after his girlfriend gasps, he says: “This bitch smell like hot dogs, bro.”

“Is there something wrong with it? It looks just fine to me,” one viewer questioned in the comments section, to which @maiabryson replied: “Yessss everything is wrong with itttt don’t yall see!”

“Um.. that looks like a normal hotel room?” another said said.

Some simply see the TikTok as a funny video. “Hot dogs sends me every time,” one said.

Others are accusing the couple being ungrateful, as some travelers reportedly end up sleeping in airports waiting for their flights.

“Would you rather sleep at the airport?” one questioned.

“Better than the airport floor,” another said.

The Wall Street Journal recently reported that “American Airlines Group Inc. canceled hundreds of additional flights on Monday, facing more of the trouble that began during the weekend as it struggles to meet growing travel demand with a staff reduced in size because of the COVID-19 pandemic.”

The airline has reportedly been struggling to manage an influx in flights after the company “encouraged thousands of workers to quit last year when air travel collapsed during the pandemic, only to be caught short-staffed this year when travel recovered faster than expected,” per AFAR.com.

The Daily Dot has reached out to @maiabryson and American Airlines for comment.