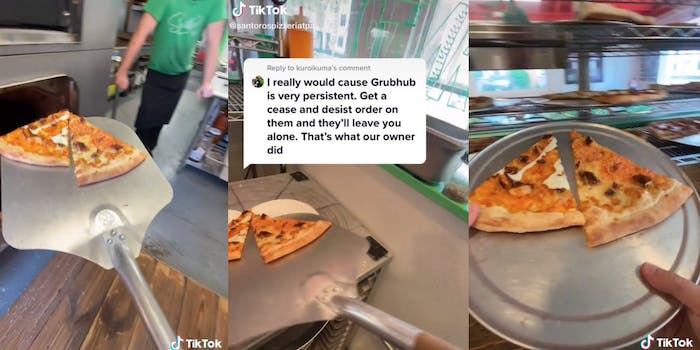 Pizzeria on TikTok blows up GrubHub over its shady business practices

Grubhub has been hit with multiple lawsuits over the issue.

A pizzeria in Florida says it has gone to war with Grubhub after the company added the restaurant to its website without permission.

The Tampa-based food establishment Santoro’s Pizzeria revealed in a TikTok video this week that customers had been ordering their food through Grubhub despite the restaurant only providing deliveries through Uber Eats.

Every single order made through Grubhub was therefore never delivered, an issue the pizzeria didn’t discover until it was contacted by customers.

“We’ve been having some delivery problems recently,” an employee says. “Listen to this: Grubhub put us on their website without asking us and then customers would order and pay for food that would just never come because we were never signed up.”

The video’s comment section was immediately filled with similar stories from other restaurant workers who likewise claimed to have experienced the same issue with Grubhub.

“Grubhub would do that to our cafe,” user @kuroikuma said. “They steal your menu from online. They never update it so people order things that were seasonal and gone now.”

In a follow-up video that has already been viewed more than 400,000 times, Santoro’s Pizzeria responded to a user who suggested that the restaurant get a cease-and-desist order placed against Grubhub.

“After we posted that video we found out that so many other restaurants were going through the same thing,” the pizza employee added.

Once again, countless users flooded the comments with allegations regarding Grubhub’s business practices.

“Ooh, I used to work at a bakery which grubhub did the same thing too,” @kays.corn said. “We got them to take us off the website eventually, but it was annoying.”

The problem has been so pervasive that Grubhub was hit with a class-action lawsuit that it finally settled earlier this year.

The city of Chicago also announced a lawsuit against the company in August over what it claims are “deceptive and unfair business practices that harm restaurants and mislead consumers.”

Update 1:48pm CT: In response to questions from the Daily Dot, Grubhub confirmed that it removed the pizzeria from its listings on Thursday morning, when it became aware of the claims in the TikTok.

“Grubhub is committed to supporting restaurants, and we place restaurants on our platform to help them generate more orders and to offer our diners more variety,” a spokesperson said. “We’re developing tools that make it easier for restaurants to claim their listings or request removal, and restaurants can always request removal by reaching out to us at [email protected].”