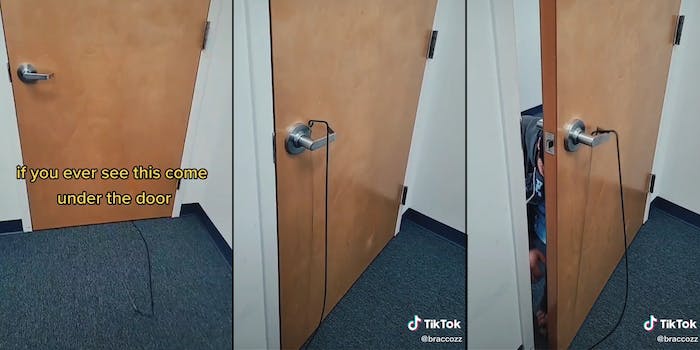 ‘I was just standing there in my towel’: TikToker documents Hilton hotel break-in, warns about contraption to open doors

A viral TikTok gave way to a viral horror story.

A TikTok showing a wire contraption being slid under a door to open it has gone viral, after a young woman recounted her own terrifying experience at a Hilton.

On May 16, Andy Bracco—the same guy who allegedly filmed on Jeffrey Epstein’s private island—posted a TikTok showing a black wire-like device being slid under a door and then snaking its way up to the handle, which it opens. The caption says if you ever see this device, to “run immediately,” which is cute.

The video has more than 14 million views, and a follow-up promising to show how to make one never materialized. Bracco responded to someone asking how that would work on a circular door handle with an even more complicated device, though in the original video it’s pretty clear the door is not even locked.

When 19-year-old Josie Bowers saw the video on her FYP, she recognized the contraption from when she and her family stayed at a Hilton in Ocean City, Maryland. In a TikTok posted May 22, she recounts how, when she was 15 and alone in the room getting ready to take a shower, she heard noises and saw the contraption open the door, which she quickly slammed shut.

“I was just standing there in my towel and this man opened the door,” she said in the TikTok video, which has more than 12 million views.

In a second TikTok, she said that two men claimed they were there to fix the door, but when she opened the door briefly to look, she realized they weren’t Hilton employees. She told BuzzFeed she recalled advice her stepdad, a cop, gave her about not letting strangers know you’re alone, and called out to him that maintenance was there. The men apparently left.

Bowers said she shared her story in hopes that it could help other women traveling alone, and that she has been in contact with Hilton about the incident, though it was apparently four years ago.

Bracco, who bills himself as an “urban climber,” said in another TikTok that he has devices like that because he’s a “covert entry specialist.”