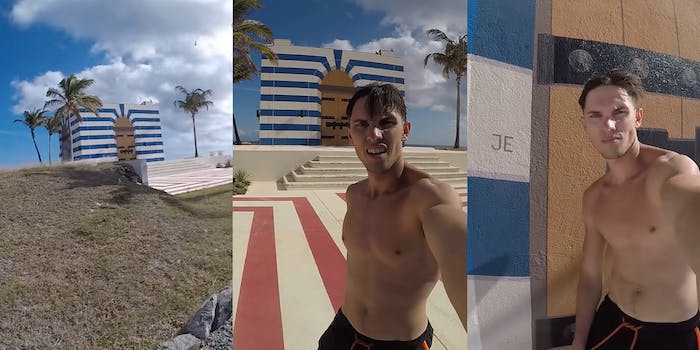 YouTube traveler and TikTok influencer Andy Bracco snuck onto Jeffrey Epstein’s infamous Caribbean island and went viral with his findings this week—though, beyond the head-turning nature of his brazen venture, his footage was mostly just creepy.

Bracco didn’t post footage of the deceased pedophile financier’s rumored hidden tunnels, though in an interview with Newsweek insinuated that he found… something: “If I was to have entered the unlocked temple, that I clearly came into close contact with, I would never self incriminate by showing my audience how I got in. Getting in would then subsequently have allowed me to access the tunnels. Between my two visits to the island I did peer into the temple from the outside and noticed the staircase descending downwards.”

He did find some of Epstein’s grandiose furnishings like the white-and-blue-striped temple building and sundial still intact. The trip was from last year, spread out over two ventures to the U.S. Virgin Islands territory, and Bracco told the Sun that “shadowy” people called him afterward.

His TikTok of the trip has accrued 423,000 views since being uploaded this week in response to a skeptic. In it, Bracco gets to the temple and says, “We did it.” It has received comments like “bro gonna go missing” and “I knew as soon as I saw the stripes.”

Another Bracco TikTok claims that the footage got his original account banned by the social media platform.

The rest of the footage made it to his YouTube channel. Bracco has not outlined what methods he took to get on the island but told Newsweek that it included evading active security on-site.

The island was known as Little St. James and Epstein purchased it in the late ‘90s. On the 70-acre island, underage girls were reportedly forced to perform sex acts. In 2019, despite being a registered sex offender, locals say Epstein was still flying in underage girls, according to a Vanity Fair investigation.

Epstein died in jail by suicide in 2019 under mysterious circumstances. A Google query for “How did Epstein die?” shows inconclusive investigations by major publishers.