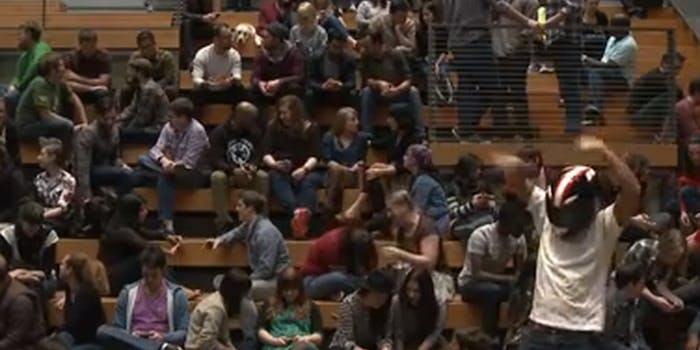 Billboard now recognizes YouTube views to determine placement on the Hot 100 chart. Could YouTube artists cheat their way up?

The change means that songs that don’t sell so well in record stores or on iTunes and Amazon can still chart if they rack up serious attention online. The development surely would have paid dividends for such YouTube one-hit wonders as Rebecca Black, Carly Rae Jepsen, and Psy.

The first to win the Hot 100 lottery this week, however, is Baauer, the architect of the abnormally popular “Harlem Shake,” which has been copied, covered, and incorporated en masse onto the YouTube network.

The song was posted to YouTube in May but recently took over the Internet as a dance craze two weeks ago.

As of Feb. 12, more than 4,000 iterations of the dance were getting uploaded to YouTube every day.

On Wednesday, the total amount of views for iterations of “Harlem Shake” had risen past 100 million.

Artists regularly take issue with the fact that third-party individuals are uploading cover videos of their original compositions, but Baauer hasn’t. Rather, Billboard reports that Baauer and his label, producer Diplo’s Mad Decent, have been aggressively monetizing the imitation videos, using copyright claims to throw advertisements on the clips and bring in AdSense money.

Wednesday night, The New York Times reported that Billboard had been in negotiations with YouTube to incorporate video views for nearly two years.

“The notion that a song has to sell in order to be a hit feels a little two or three years ago to me,” New York Times Magazine editorial director Bill Werde said. “The music business today—much to its credit—has started to learn that there are lots of different ways a song can be a hit, and lots of different ways that the business can benefit from it being a hit.”

It will be interesting to see how Billboard accounts for botted views, or falsified views that don’t come to a video’s view count naturally. While publicly ignored by YouTube, it’s widely known that massive collections of YouTube views are available for purchase at bargain-bin prices on a number of sites around the Web.

Which forces the question: Can you buy your way to the top of the charts?